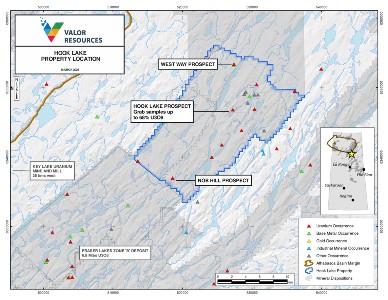 Skyharbour holds an extensive portfolio of uranium and thorium exploration projects in Canada’s Athabasca Basin and is well positioned to benefit from improving uranium market fundamentals with six drill-ready projects. Skyharbour has acquired from Denison Mines, a large strategic shareholder of the Company, a 100% interest in the Moore Uranium Project which is located 15 kilometres east of Denison’s Wheeler River project and 39 kilometres south of Cameco’s McArthur River uranium mine. Moore is an advanced stage uranium exploration property with high grade uranium mineralization at the Maverick Zone that returned drill results of up to 6.0% U3O8 over 5.9 metres including 20.8% U3O8 over 1.5 metres at a vertical depth of 265 metres.

Skyharbour has and option agreement with Orano Canada Inc. and a joint venture agreement with Azincourt Energy. Orano can earn in up to 70% of the Preston and Azincourt recently earned in 70% of the East Preston Project, respectively, through a combined $9,800,000 in total exploration expenditures, as well as $1,700,000 in total cash payments and Azincourt shares. Preston and Preston East are large, geologically prospective properties proximal to Fission Uranium’s Triple R deposit as well as NexGen Energy’s Arrow deposit.

The Company owns a 100% interest in the South Falcon Uranium Project on the eastern perimeter of the Basin which contains a NI 43-101 inferred resource totaling 7.0 million pounds of U3O8 at 0.03% and 5.3 million pounds of ThO2 at 0.023%. Skyharbour has signed a Definitive Agreement with Australian company Pitchblende Energy, which is being acquired by ASX-listed Valor Resources, on the North Falcon Uranium Project whereby Pitchblende can earn-in 80% of the project through $3,500,000 in total exploration expenditures, $475,000 in total cash payments over three years and an initial share issuance.

In this exclusive interview Mickey Fulp the Mercenary Geologist sits down with Maurice Jackson the founder of Proven and Probable to discuss a wide range of topics from Precious Metals to Base Metals and best value propositions available for you the speculator.

Before you make your next precious metals purchase, call me at 855.505.1900 or email maurice@milesfrankin.com