VANCOUVER, BC / ACCESSWIRE / August 6, 2021 / NV Gold Corp. (TSXV:NVX)(OTCQB:NVGLF)(FSE:8NV) announced today that Dr. Quinton Hennigh is retiring as a director of the Company. Dr. Hennigh has generously served as an NV Gold board member since its inception in 2009. Dr. Hennigh is resigning from all of his numerous board positions to fully focus on his new position with CRESCAT Capital. He will, however continue as a Board Advisor to the NV Gold. “The management and fellow directors of NVX join me in wishing Quinton well in his new position and sincerely thank him for his extensive contributions to our Company,” says John Watson, Chairman and CEO.

Mr. Watson also reported that work is moving forward on several of its Nevada projects in preparation for multiple drilling programs over the next 6 months. Notices of Intent are being submitted for drilling programs on the Slumber, Discovery Bay and Pickhandle projects. While drilling equipment remains difficult to procure, the Company expects to be able to begin its drilling campaigns in late September or early October. Equipment and drilling personnel remain in short supply, making exact timing uncertain.

NVX’s singular focus is exploration in Nevada, USA, one of the most prolific gold producing regions in the world. The Company has over 20 property holdings in this highly-competitive region, several of which are advanced and are drill ready. The next year promises to be very exciting, with news and progress on several projects.

NV Gold is a well-financed exploration company with a strong treasury and no debt. The company is based in Vancouver, B.C., and is focused on delivering value through mineral discoveries in Nevada, United States, leveraging its highly experienced in-house technical team and strong property position. 2021 and 2022 promise to be NV Gold’s busiest exploration years to date.

This news release includes certain forward-looking statements or information. All statements other than statements of historical fact included in this release, including, without limitation, statements regarding the Company’s planned exploration activities, the potential for a discovery at its properties, and acquisition of new gold projects are forward-looking statements that involve various risks and uncertainties. There can be no assurance that such statements will prove to be accurate and actual results and future events could differ materially from those anticipated in such statements. Important factors that could cause actual results to differ materially from the Company’s plans or expectations include regulatory issues, market prices, availability of capital and financing, general economic, market or business conditions, timeliness of government or regulatory approvals, the extent to which mineralized structures extend on to the Company’s Projects and other risks detailed herein and from time to time in the filings made by the Company with securities regulators. The Company disclaims any intention or obligation to update or revise any forward-looking statements whether as a result of new information, future events or otherwise, except as otherwise required by applicable securities legislation. 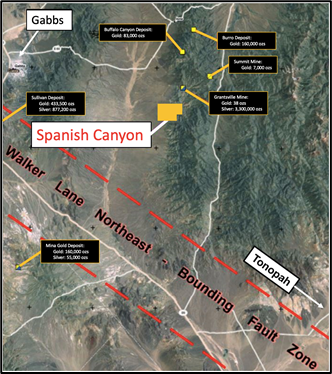 “Spanish Canyon is an exceptional property that is an advanced and drill ready gold project that the Company will look to explore in 2021. We continue to build strong relationships and partnerships with some of the most well-known explorers in Nevada to create the opportunity for a gold discovery,” commented Peter A. Ball, President and CEO of NV Gold. “I’m excited to work with Tom Callicrate from Mountain Gold Claims, who brings over 35 years of Nevada mineral exploration experience. Our technical team is focused on drill testing several high-priority projects in 2021 to advance each target to a secondary decision point as quickly and cost-effectively as possible.”


Peter A. Ball, President and CEO, commented, “We expect the FSE listing will assist in increasing trading liquidity and also facilitate potential investment in the Company by institutional and retail investors across Europe. The listing on the Frankfurt Stock Exchange, in addition to the Canadian TSXV and United States OTCQB listings, will heighten exposure of the Company in this major marketplace with its knowledgeable investor base traditionally very active in the junior gold mining sector.”

“We are pleased to have received exceptional interest in our private placement to support our vision to make one of the next big gold discoveries in Nevada. As we enter one of our busiest exploration seasons in our corporate history, we appreciate Crescat Capital’s support by further increasing its holdings in NV Gold, and also new large long term strategic investors from Europe, North America, and Asia,” commented Peter A. Ball, President and CEO of NV Gold. “As we push forward in 2021, NV Gold controls an extensive portfolio of drill-ready gold projects and the recent signing of a US$10M option agreement by Hochschild Mining on our SW Pipe Gold Project is a reflection of the potential of our portfolio’s potential. We are currently putting together a comprehensive exploration program to test multiple other projects, including deep core hole programs at the Slumber and Sandy Gold Projects. In addition, our technical team is currently reviewing accretive acquisitions and also speaking with various groups for joint ventures on projects within our portfolio.”