Energy Has A Little Gas Left In The Tank 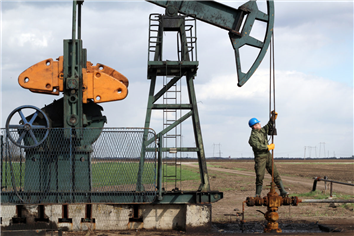 As we evaluate different sectors, we consider a wide swath of factors, such as what they’ve done over the last year, how they typically perform in this type of political and fiscal policy environment and even if the particular time of the year has an effect. To be completely transparent, we considered utilities and REITS, which this week broke out to record highs. The technician in us says the breakout should carry those sectors higher, in part because they benefit from the Federal Reserve taking a more dovish stance on raising interest rates. Our only trepidation is that if we start seeing signs of greater economic strength, traders might turn their backs on these sectors, causing the run to turn over.
Rather than talk about what we didn’t select to discuss this month (apologies…we couldn’t leave out that commentary), we’d like to advise investors to keep an eye on the energy sector, which is a collection of stocks spanning energy businesses like oil, gas, consumable fuel, renewable/alternative, services and equipment. For starters, March has historically been a solid month for the Energy Select Sector SPDR (NYSE:XLE), the benchmark ETF for energy plays. According to CXO Advisory data, XLE has been the best performing SPDR ETF in March since the SPDR ETFs began trading 20 years ago. So far, XLE is up 1.12% this month, compared to its average return of 2.9%.
Even better, XLE is also the top performer in April at 3.7%. If that trend will continue, the energy sector will add to a solid 2019 to date, where it is ahead by about 15% through Wednesday. That’s a nice recovery after energy was the S&P 500’s worst performing sector in 2018 with XLE shedding 18.2%.
In fairness, a lot of the gain has been at the hands of Chevron (NYSE:CVX) and Exxon Mobil (NYSE:XOM), as the two oil stalwarts cumulatively comprise more than 40% of XLE’s weight (XOM: 23.36%, CVX: 19.72%). Both stocks are up more than 10% in 2019, carrying XLE higher.
Since printing $107 in June 2014, spot oil prices fell off a cliff, plummeting as low as $26.05 in February 2016 before turning things around. The clear culprit for the steep drop was oversupply, a problem that looms globally today. On the strength of the Organization of Petroleum Exporting Countries (OPEC) and its allies going to great lengths to curb output and support oil prices, spot crude climbed back to a $40-$55 range for more than a year before making the next leg up in November 2017 to swell to a high of $76.90 in October 2018. Subsequently, another collapse occurred, driving oil back down to a low of $42.36 in December. Another recovery has ensued in 2019, lifting oil prices back to the upper $50’s.
While energy stocks are frequently bootstrapped to the price of a barrel of oil, we expect a little bit of a slingshot effect based on fundamentals, not oil prices, in the future. This is due to the fact that earnings actually grew in the energy sector in 2018, but the market failed to reflect the expansion. To that point, there has been no improvement in valuation metrics between current levels and when oil was bottoming near $26 a barrel in 2016. In fact, XLE trades at a slightly lower valuation than the 15x trailing 12-month earnings that it did back when oil bottomed in February 2016.
In addition to oversupply, there are other factors that have a choke hold on confidence in the oil and gas industry. Namely, regulation is a concern. Eldar Sætre, CEO of Equinor, Norway’s biggest energy company, acknowledged this on Monday at the CERAWeek by IHS Markit conference, noting that environmental issues threaten the industry and that O&G companies must unitedly take a progressive approach to combat emissions and pollution.
So, with a large shortfall in demand versus supply and environmental issues that can’t be rapidly corrected, why are we bullish on energy? The answer is: “just for right now.” We’re looking at the sector for the next six weeks of so and we’ll have to see what happens come summer (the driving season) and reassess gasoline inventories to get a better understanding on potential market direction. What we are also banking on is history and the fact that the energy sector has typically been an outperformer March and April.

This dive into the sector uncovered many beaten down companies in the small or microcaps space that have languished with the sell-off in energy at the end of last year. It’s fair to say that energy plays abound in the microcap space, but we recommend sticking to those generating revenue, whether it be a producer like the three below or a services company like Profire Energy (NASDAQ:PFIE).
Broadly speaking, there is no shortage of companies that can be argued as value plays given depressed valuations as Wall Street questions the energy sector at the moment.
Jericho Oil Corp. (OTCPK:JROOF) (TSX-Venture:JCO), is focused on domestic, liquids-rich unconventional resource plays, located primarily in the oil-prone Meramec and Osage formations in the Anadarko basin STACK Play of Oklahoma, a region trumpeted by some as the next great U.S. oil play. To that point, majors likes ExxonMobil, Chesapeake Energy, Sandridge Energy and Chaparral Energy continue to put considerable capital resources in and around Jericho’s STACK acreage position. Jericho has assembled an interest in 55,000 net acres across Oklahoma, including an interest in ~16,000 net acres in the STACK Play. The Tulsa-based company recently released preliminary 2018 full-year partnership production, which hit a record high of approximately 297,000 barrels of oil equivalent (BOE), up 33% from 2017’s total. Furthermore, Jericho cut operating expenses by 30% to about $17.00/BOE. At 42 Canadian cents per share, JCO is commanding a market cap of just $54 million.
Northern Oil and Gas, Inc. (NYSE American:NOG), which runs a non-operator model, also delivered record results in 2018. The company controls leasehold of approximately 157,000 net acres targeting the Williston Basin Bakken and Three Forks formations in North Dakota and Montana, and approximately 93% of its total acreage position was developed, held by production or held by operations. During Q4, production increased 117% over the prior year and 36% over the prior quarter, averaging a record of 36,258 BOE per day. Furthermore, lease operating expenses and general and administrative expenses were each down 26% per BOE from the prior year. For all of 2018, production increased 73% year-over-year, averaging a record 25,555 BOE per day. The company was profitable, generating net income of $143.7 million, or 61 cents per diluted share, reversing from a net loss of 15 cents per diluted share in 2017. Shares of NOG got more than halved from a 52-week high ($4.49) in October to an eight-month low at $1.87 in December. The stock is trying to make up some lost ground, trending back into the mid-$2 range as it closes in on a $1 billion market cap.
Lonestar Resources US (NASDAQ:LONE) is another that recently pumped out more oil than it had ever before in a quarter. Lonestar is an independent oil and natural gas company, focused on the development, production and acquisition of unconventional oil, NGLs (natural gas liquids) and natural gas properties in the Eagle Ford Shale in Texas. The company has accumulated approximately 78,193 gross (57,491 net) acres in what it believes to be the formation’s crude oil and condensate windows. For the fourth quarter, Lonestar reported an 81% increase in net oil and gas production to 13,152 BOE per day, compared to 7,272 BOE per day for the three months ended December 31, 2017. The company’s record production volumes exceeded its guidance of 12,600 – 12,800 BOE/D and were 80% crude oil and NGL’s on an equivalent basis. Lonestar reported net income of $75.2 million during 4Q18 compared to a net loss of $17.6 million during 4Q17, while citing certain non-recurring items in the big gain. Excluding those items, Lonestar’s adjusted net income for 4Q18 was $5.4 million, or $0.22 per basic common share. Lonestar has reiterated its previously-issued 2019 production guidance of 13,700 to 14,700 BOE per day for 2019, which equates to production growth of 27% over 2018 levels. Last July, shares of LONE traded as high as $11.24 before diving to a low of $3.41 in December. Shares are currently trading at $4.27, equarting to a market capitalization of approximately $105 million.