Keith Schaefer, publisher of Oil & Gas Investments Bulletin, profiles a small-cap oil and gas firm active in the Oklahoma STACK that he believes stands out from the pack.

Oil stocks will be a screaming buy sometime between now and Dec. 31. Tax loss selling pressure will add to the pressure of lower oil prices, and some crescendo of selling will hit in the coming weeks, if not days.
So where do I look to buy into this fear?
I’ll tell you why I’m looking at Jericho Oil Corp. (JCO:TSX.V; JROOF:OTC)
They’ve hit on a couple monster wells in the last quarter, validating all their acreage. They’re in Oklahoma, which enjoys some of the best oil prices in North America. And Encana’s $5.5 billion buyout of Newfield tells me the industry loves this play.
All these producers will have a reflex bounce up come January—just from the mindless selling pressure of tax loss time ending. There is a “gimme” of 20-30% coming in early January.
But I think you have to be analytical to figure out where The Big Winners will be.
Pricing power has actually become A Big Deal for oil producers. Oklahoma is getting GREAT pricing, just $1.50/b off WTI.
The Big Oil Plays in North America are suffering from severe price discounts. Permian producers got scorched early this year as the amount of oil being produced overwhelmed infrastructure and West Texas oil prices tumbled to first $8, then $12 and finally $20/b lower than WTI pricing.

The Bakken in North Dakota had been enjoying a premium to WTI after the Dakota Access Pipeline went into service last year—but surging production there has already filled it and that premium has rapidly fallen to a $20/b discount on some days recently.

One of the largest producing basins is the Canadian oil sands, and those barrels have had a $50/b discount some days. That’s really ugly.

So I’m looking to invest where I can get the best bang for my buck—and that’s the U.S. midcontinent.
STACK Drilling Results Far Better Than Lofty Expectations
Jericho got into the STACK play in textbook fashion—it spent 2015/2016 patiently buying assets for pennies on the dollar, a rare company armed with cash in a world full of desperate sellers.
2018 was the inflection point where Jericho Oil switched from asset accumulation mode to production growth mode. The early results for Jericho’s STACK wells have vastly exceeded management’s own lofty expectations.
Jericho’s first well was the Wardroom 13-19N-13W #1H well, which was put on production early this summer.
The well targeted the Meramec formation within the STACK and the results knocked the ball out of the park.
This was a monster well.
Where Jericho Has Been Drilling 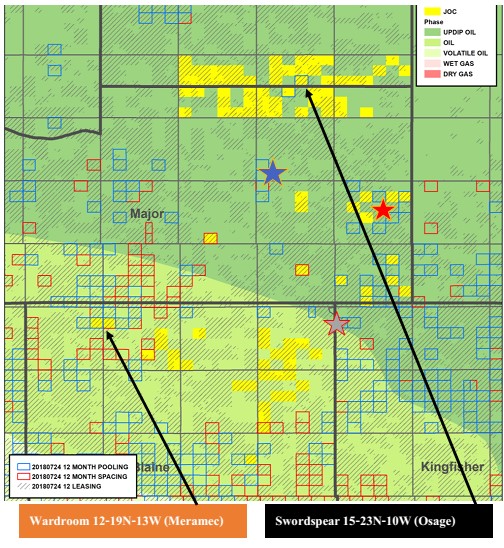 Source: Jericho Oil Corporate Presentation
The Meramec well came on production at an eye-popping 950 boe/day. That was a top decile result for the entire basin and Jericho did it on their very first attempt. Today—after 230 days—the well has verified the quality of Jericho’s acreage.
Jericho’s second well was the Swordspear 15-23N-10W location. This well targeted a second formation within the STACK which called the Osage. The Osage is quite different than the Meramec because it is a conventional reservoir.
Conventional means lower rates of initial production, but also much lower decline rates. This is the kind of production that generates stable cash flows that most junior growth companies don’t have access to.
Jericho’s Swordspear well came on at an excellent production rate of 500 boe/day. Since then production from the well has remained exceptionally strong. After 30 days the well was still doing 450 boe/day.
Just yesterday they said the well has averaged 330 boepd after 160 days. Having the Osage as a low-decline, second formation provides the perfect complement to the big initial production rates of the Meramec.
These 2018 drilling results from Jericho really couldn’t have been better. And while the results have been excellent they really aren’t all that surprising.
Competitors including Alta Mesa, Chaparral, Devon, Continental, Newfield, Exxon Mobil and Staghorn have been drilling excellent wells all around Jericho.
The economics of this acreage are equal to the best in the industry. 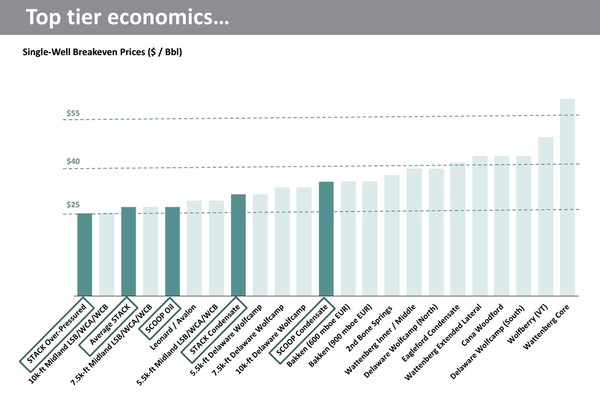 Source: Newfield Exploration Presentation
Not surprisingly, leasing activity in the play has increased by 1,800% over last year. . .making STACK acreage more highly coveted. The industry wants this play badly.
We don’t have to look any further than the $5.5 billion that Encana (ECA-NYSE/TSX) just agreed to pay for Newfield Exploration (NFX-NYSE) for proof of that.
So we’ve got:

And now for 3. . .a land value underpinning the stock that’s worth 2-5x what the stock is trading for. This kind of valuation is really only relevant on a buyout, but it’s the kind of valuation that lets me sleep at night.
Jericho and Partners’ 16,000 Net Core Acres in the STACK 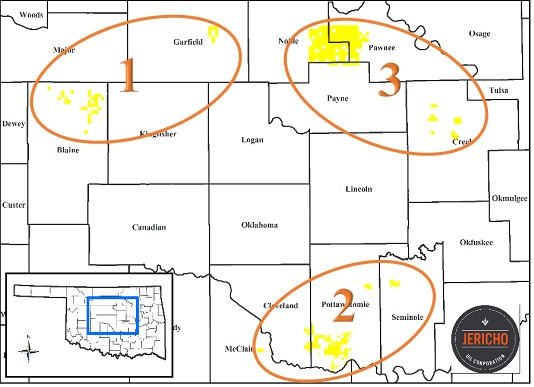 Source: Jericho Oil Corporate Presentation
Today Jericho and its partners are sitting on 16,000 net acres of highly coveted STACK acreage. On average, Jericho was able to acquire that land for $2,300 per acre.
What is that land worth today? It isn’t hard to determine.
With companies now rapidly acquiring acreage all around Jericho we have a steady flow of documented arm’s length data points available to do such a calculation.
Documented STACK Transactions 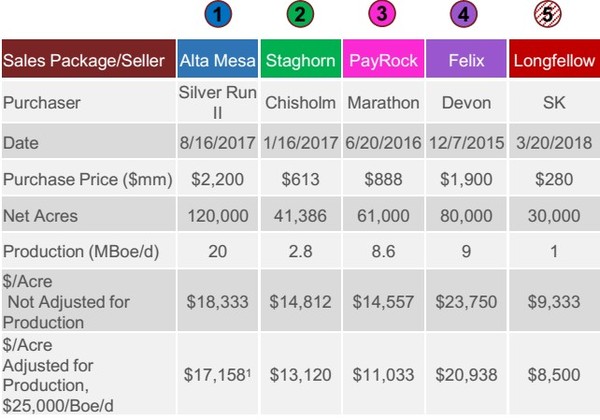 Source: Chaparral Energy
Adjusted for production, STACK acreage has been trading hands at prices ranging from $8,500 to $20,938 per acre.
That is hard, verifiable, data.
This provides us with a range of values, many of which were established when oil prices were much lower than today and when the play was much less proven.
What these data points show us is that acreage today is worth 4 to 10 times what Jericho paid for it. Jericho’s “buy when there is blood in the streets” strategy has allowed the company to make multiples on their investment.
That’s why I’m looking to increase my position in Jericho.
To conclude, I would add a couple soft points. JCO has a smart, deep-pocketed and tightly held shareholder base. These shareholders include unusually heavy hitters like Ed Breen, the CEO of Dow DuPont. It is a shareholder group that screams of credibility and long-term thinking.
These insiders own a full 46% of Jericho’s shares. These people all get paid one way. . .if Jericho’s share price goes up over the long term.
All of this is a recipe for commodity development success. Buy good assets when commodity prices are low, then develop those assets and sell the production when commodity price rise.
Keith Schaefer is editor and publisher of the Oil & Gas Investments Bulletin, which finds, researches and profiles growing oil and gas companies that Schaefer buys himself, so Bulletin subscribers know he has his own money on the line. He identifies oil and gas companies that have high or potentially high growth rates and that are covered by several research analysts. He has a degree in journalism and has worked for several Canadian dailies but has spent over 15 years assisting public resource companies in raising exploration and expansion capital.

Read what other experts are saying about:

Disclosure:
1) Keith Schaefer disclosures are below.
2) The following companies mentioned in this article are billboard sponsors of Streetwise Reports: Jericho Oil. Click here for important disclosures about sponsor fees. An affiliate of Streetwise Reports is conducting a digital media marketing campaign for this article on behalf of Jericho Oil. Please click here for more information.
3) Statements and opinions expressed are the opinions of the author and not of Streetwise Reports or its officers. The author is wholly responsible for the validity of the statements. The author was not paid by Streetwise Reports for this article. Streetwise Reports was not paid by the author to publish or syndicate this article. The information provided above is for informational purposes only and is not a recommendation to buy or sell any security. Streetwise Reports requires contributing authors to disclose any shareholdings in, or economic relationships with, companies that they write about. Streetwise Reports relies upon the authors to accurately provide this information and Streetwise Reports has no means of verifying its accuracy.
4) This article does not constitute investment advice. Each reader is encouraged to consult with his or her individual financial professional and any action a reader takes as a result of information presented here is his or her own responsibility. By opening this page, each reader accepts and agrees to Streetwise Reports’ terms of use and full legal disclaimer. This article is not a solicitation for investment. Streetwise Reports does not render general or specific investment advice and the information on Streetwise Reports should not be considered a recommendation to buy or sell any security. Streetwise Reports does not endorse or recommend the business, products, services or securities of any company mentioned on Streetwise Reports.
5) From time to time, Streetwise Reports LLC and its directors, officers, employees or members of their families, as well as persons interviewed for articles and interviews on the site, may have a long or short position in securities mentioned. Directors, officers, employees or members of their immediate families are prohibited from making purchases and/or sales of those securities in the open market or otherwise from the time of the interview or the decision to write an article until three business days after the publication of the interview or article. The foregoing prohibition does not apply to articles that in substance only restate previously published company releases. As of the date of this article, officers and/or employees of Streetwise Reports LLC (including members of their household) own securities of Jericho Oil, a company mentioned in this article.
Keith Schaefer and Oil and Gas Investments Bulletin Disclosures:
DISCLOSURE: I am long Jericho Oil.
Management at Jericho Oil has reviewed and sponsored this story. The information in this newsletter does not constitute an offer to sell or a solicitation of an offer to buy any securities of a corporation or entity, including U.S. Traded Securities or U.S. Quoted Securities, in the United States or to U.S. Persons. Securities may not be offered or sold in the United States except in compliance with the registration requirements of the Securities Act and applicable U.S. state securities laws or pursuant to an exemption therefrom. Any public offering of securities in the United States may only be made by means of a prospectus containing detailed information about the corporation or entity and its management as well as financial statements. No securities regulatory authority in the United States has either approved or disapproved of the contents of any newsletter.
Keith Schaefer is not registered with the United States Securities and Exchange Commission (the “SEC”): as a “broker-dealer” under the Exchange Act, as an “investment adviser” under the Investment Advisers Act of 1940, or in any other capacity. He is also not registered with any state securities commission or authority as a broker-dealer or investment advisor or in any other capacity.
Charts provided by the author.