Bob Moriarty
Archives
Dec 21, 2018
Novo just announced results from testing at two different projects in the Pilbara. I’ll start this piece with the results from the Tomra sorting machine because it’s so simple to understand. It works.
Novo took four samples from Purdy’s/Comet Well and ran them through the Tomra machine. In three of the tests, the material ranging in size from 6 mm to 63 mm consisted of about two thirds of the total weight. The sorter removed 99.52% of the total mass. The small amount of material above 63 mm won’t trigger the sorting mechanism so must be crushed to below 63 mm to process. The smaller than 6 mm material is about 30% of the total weight. In the last sample processed, the incoming material was greater than 10 mm for 50% of the total and below 10 mm for the other 49%+.
The sorter works and Novo expects to announce final grade for the material in January. But the sorter increased the grade of the concentrate to as high as 792.4 g/t. That would be direct shipping ore that any smelter in the world would be thrilled to buy and by shipping only the sorted material, Novo has made the gold secure.
The results from Egina get even more interesting and I’m writing this because it is an area I am very familiar with and few readers will be.
Few people know this but I have been well aware for many years about the danger of the financial system. I spent almost fifteen years trying to set up an alluvial project that would provide an independent source of income for when the shit hits the fan. I have invested my own money in alluvial projects in Chile, BC, Ghana, Tanzania and Guiana. I picked up some ground in the south island of New Zealand that looked interesting but sold it to another company. I have mined alluvials. I know the costs and all the associated problems. I know many of the people in the industry.
Few hard rock geos understand anything about alluvials and it’s just as true that most alluvial miners don’t know much about hard rock mining. Each has its own issues.
These are the nuggets and fine gold from the latest test at Egina provided to me by Quinton. 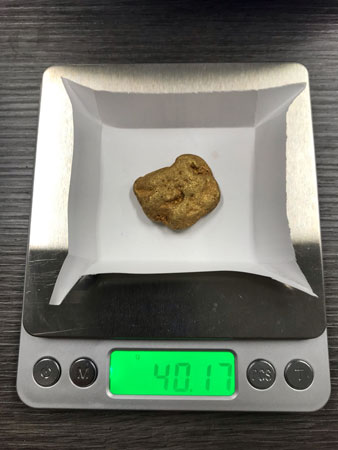 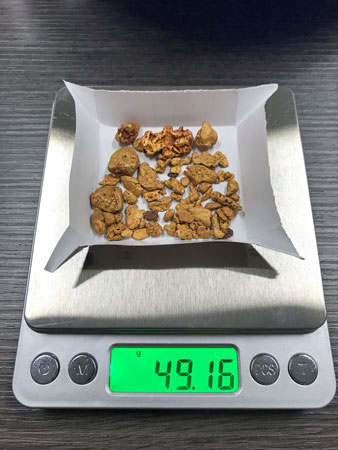 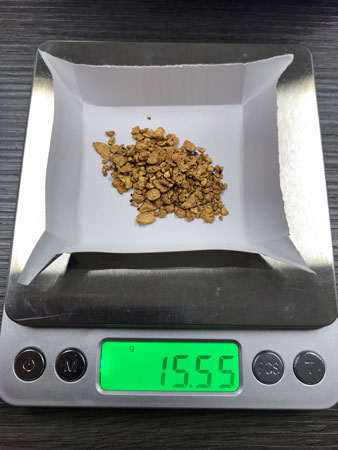 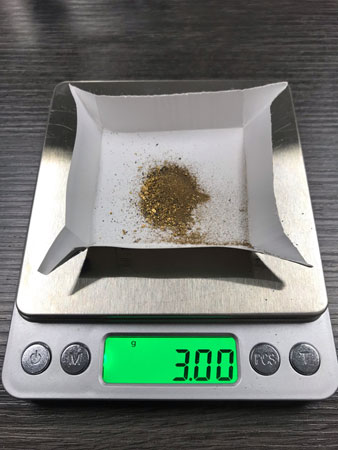 When you mine alluvials, you always measure the material with either cubic yards or cubic meters depending on where you are. Novo is a Canadian company so we should use cubic meters. You do this because when you are mining alluvials you are using yellow gear to move dirt. Dump trucks, excavators, bull dozers are always thought of in their cubic capacity.
To mine gold, you don’t focus on the gold. All you do is get rid of everything that is not gold. You need to know how much water you have if you are mining wet and how clean the water is. You need to know the range of the size of gold; you need to know if there is clay in the material. You need to know the cobble size and if there are any boulders present. Then you design your system.
Novo had a plant that they used at Beaton’s Creek in a bulk sample a couple of years ago. It was moved to Egina and set up there. Novo just released the first results. I’ll go through the numbers.
This is the only time I will use tons because it is the wrong measure for alluvials but I want to ease readers into understanding how the numbers work.
Novo processed 170 tons. That was 95 cubic meters giving about 1.8 tons per cubic meter and now we will never talk about tons again with alluvials. In the 95 cubic meters Novo recovered 107.88 grams of raw gold with a fineness of .91 to .93 giving a grade of 1.14 g/m of raw gold.
We will convert the raw gold to fine gold so we can do the correct math to see the value. We do that by multiplying 1.14 by .91 giving 1.03 g/m of pure gold. As I do this piece the price of gold is $1259.18 an ounce in USD so the value of a cubic meter of material in this test was $41.84.
Since that value of gold per cubic meter won’t mean much to most readers, I will convert it based on the five alluvial projects I operated and some advice from others who know. I would figure a cost of $8 a meter but I was operating in low cost countries and Australia isn’t low cost. I talked to Keith Barron. Few know it but he owns and operates a sapphire mine in Montana. He uses a figure of $10.70 per cubic meter and I’d call Montana a medium cost environment.
I talked at length to someone who has done alluvial mining in Australia and he came up with a figure of $27 Aussie per cubic meter. Call it $20 a cubic meter in USD. Here is something that should be as obvious as a pimple on your tongue. If your revenue is $42 a meter and your all in costs are $20 a meter, you are going to make a boatload of money. I never have any problem of saying what I believe. I know Novo has the best alluvial guy in the world designing a plant and I’ll tell you right now the costs are going to come in at about $15 a meter USD. You can use $20 USD if you are the world’s biggest and most negative guy but I will start busting kneecaps if they go above $15 a cubic meter.
Quinton and I drove from Karratha to Egina. We drove over mile after mile of an alluvial terrace. Novo owns about 1,000 square km of ground around Egina that measures 1-3 meters in depth from the surface in gravel. Now, if you accept that all this gold came from the conglomerates as they weathered, there is a lot of gold potentially. Quinton and I pretty much agreed that it could be mineralized all the way to the Indian Ocean.
If you have one square km of gravel one meter deep grading 1.14 g/m at a fineness of .91 you have about 36,608 ounces of raw gold. If you have 1000 square km or even 100 square km of even .5 meters gravel, you have a lot of gold.
Novo is permitted for a 50,000-ton bulk sample. When the Australian summer cools down to a reasonable temperature in March or April, Novo will begin processing and testing. Cash flow will start then. They still have to come to an agreement with the native corporation and be permitted for large-scale operation. That could take a year.
If you are going to mine alluvials at a profit, you need the most experienced people you can find. Kirkland Lake doesn’t have them. Egina would never make a successful project for Kirkland Lake; it’s not their sort of project.
I contacted Pacton before I made my trip a month ago and for only the 2nd time in the last 18 years, when a company found I was going to be in the neighborhood, they showed no interest in meeting with me or briefing me. The other time a company wasn’t interested in briefing me, the company went bankrupt.
I gave the management of Pacton the name and contact details of the best alluvial person I know in Canada so they could talk to her. They said they would contact her but never did. Pacton was an advertiser and I would have loved to write about them but frankly I have no idea of what they are doing. And if they aren’t interested in talking to the most experienced alluvial operator I know of in Canada, well, good luck with that.
Novo is on track and on target. I own shares, I have participated in a lot of private placements and I couldn’t be any more biased than I am. Do your own due diligence.
Novo Resources
NVO-V $2.15 (Dec 20, 2018)
NSRPF $1.60 OTCQX 162.3 million shares
Novo Resources website
###
Bob Moriarty
President: 321gold
Archives
321gold Ltd