For those who follow College Basketball, the next few weeks are some of the most enjoyable and exciting months on the sports calendar. For those new to sports or living under a rock, March Madness brings together 64 College teams in a single elimination tournament . The brackets get tighter with each round 64 / 32/ 16/ 8/ 4/ and finally, a duke out between the two last remaining teams. As the brackets dwindle down the contests have sub names ” The Sweet 16 “ / ” the Elite Eight ” / ” the Final Four ” and the ” Championship Game “.

The games are usually very exciting, often coming down to the last possession and consequently, there are usually quite a few upsets on the Road to the Final Four. In this spirit, I have decided to make my own March Madness Tournament involving my favorite Junior Mining Stocks.
I compiled a list of my favorite Junior Resource Stocks in an article entitled The 12 Days of Christmas.
This list was comprised of 12 stocks that I have been following closely and I own shares in. The list has been pared down to The Elite Eight for the brackets to work out. I am using the share price of the companies on 12-24-18 when the article was published as a benchmark. I am attempting to put companies with similar share prices paired against one another. After each round the companies that have the highest % gain will move on to the next round. Simple enough now without any further ado… Let’s meet the Elite Eight. 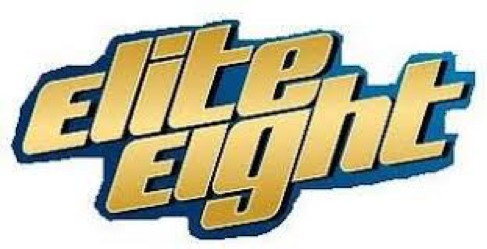 McEwen Mining – this undervalued producer striving to get a listing on the S&P is really at the mercy of the price of Gold. Its CEO draws a dollar a year salary so he is truly at the mercy of the stock’s performance. If shareholders win, he wins. What a novel concept !!! It was recommended on 12-24-2018 @ $1.79/ MUX
Irving Resources– this tightly held sleeper is headed up by Quinton Hennigh ,which almost guarantees big things. Permitting is now in place and this one-time huge producing mine in Japan is drill ready and ready to rock. “Q“ knows how to position the Truth Meter to confess up the Truth and nothing but the Truth. Price when recommended $1.80/IRV

McEwen has hit a rough patch lately, mining delays and setbacks along with tepid Gold price has not helped. I still believe and hold shares in this company and feel in due time it will perform admirably. You can’t keep its leader Rob McEwen down for long.
Irving Resources is on a roll, drilling has commenced and Quentin knows how to position the truth meter. IRV moves to Final Four with plenty of momentum. Having a dominate big man in the lane “Q” makes this company a formidable foe.

Jericho Oil – with steadily rising OIL prices… up over 30% in two months and located in the very friendly Oil state of Oklahoma, in the prolific STACK region. It boasts as its neighbors some mighty titans of the Oil industry. It is only a matter of time before this gets legs and gains well deserved attention. JCO/ 43 cents
First Vanadium – with a recently released updated Resource Estimate with staggering numbers, this tightly held stock needs to be revisited. The company just added 1.5 Billion pounds of Vanadium which is currently going for close to $18 a pound. You do the math. Your head will spin !!! FVAN /77 cents

First Vanadium was up to $1.07 in early March after a very successful PDAC showing but has dropped big time due to softening Vanadium prices. This stock is not for the faint of heart but I believe ultimately it will be a great company to own.
Jericho Oil limps into the Final Four still waiting to catch a bid with Oil prices still creeping up. Led by point guard, IR Director, Adam Rabiner it is just a matter of time, Spring will start fresh news flow and Adam works his solid connections and network.

Serengeti Resources – a recently released Pre-Feasibility Study revealed an impressive overall increase in contained metal from the 2016 Indicated Resource estimate. Highlights included increases of 44% for copper, 32% for gold, and 52% for silver in the M+I categories. This stock was hammered mysteriously on these fantastic results. Somebody wants this stock on the cheap and for good reason. Ricks’ Café continues to live on in the Junior sector!!! SIR/17 cents
Anaconda Resources– this stock was once the darling of PDAC in 2018. My how much a year has changed. ANX keeps putting out great news… to crickets. Perhaps new blood at the top would pump new life into this sleeper and get it back on track. There is much buzz about M&A and COB, Jonathan Fitzgerald is a cagey deal maker who makes great things happen. ANX/ 22 cents
Bracket 3) WINNER – ANX -22 Cents (Anaconda Mining) up 10 cents to 32 Cents = 45% Gain
SIR-17 Cents (Serengeti Resources) up 7 cents to 24 Cents = 41% gain
Serengeti continues to perplex it has had great drill results and very favorable PFS but just can’t gain traction. The Metallurgic Study from Kwanika is due any day perhaps that will get this undervalued junior some love. This stock remains a mystery.
Anaconda Mining has been preforming on steroids as of late. Volume has increased considerably and me thinks something very good is coming. ANX vaults into the Final Four with plenty of wind at its back and fresh legs. They have a strong bench led by COB, Jonathan Fitzgerald.

Arizona Silver Exploration – continues to amaze. It is slowly coming back to life and I believe still has plenty of upside. Sharp management who put their money where their mouth is. Share structure is super tight as they know how and when to finance without warrants. They have added 2 new highly prospective properties which are drill ready awaiting final permitting. This company is a blueprint for success and how to run a Junior Miner. AZS/ 8 cents
Precipitate Gold – this is run by a very sharp, intelligent, savvy CEO, Jeff Wilson. They have smartly acquired a property in the Dominican Republic which butts up next to Barrick’s Pueblo Viejo Mine. This acquisition and resulting drill results could make Jeff Wilson a legend. It seems the new government in the DR is much easier to work with than the previous scoundrels. Having savant Quinton Hennigh on the board certainly adds to the allure. PRG/ 12 cents
Bracket 4) WINNER AZS- 8 Cents (Arizona Silver Exploration ) Up 6 cents to 13 cents) = % Gain
PRG- 12 Cents (Precipitate Gold) Even at 12 cents = 0 % Gain
Precipitate Gold has not started a drill program yet so that has diverted attention from this highly prospective undervalued Junior. Keep your eyes on this one, you will be surprised pleasantly to the upside, management is top notch along with the location of the property.
AZS moves to the Final Four although the stock has shown weakness as of late. It’s waiting to commence drilling on two new prime targets. Power Forward, Mike Stark crashes the boards and keeps the opposition at bay with his aggressive style.
A reminder we will check highest % gainers with my 12 Days of Christmas article and the price of each stock from the 12-24-18 benchmark to determine their performance in the tournament. I am a fan of all of these companies and hold positions in all and some in great quantity in my own portfolio. So there are no losers among these companies… only winners…but somebody will prove to be a worthy champion in a months’ time!!! 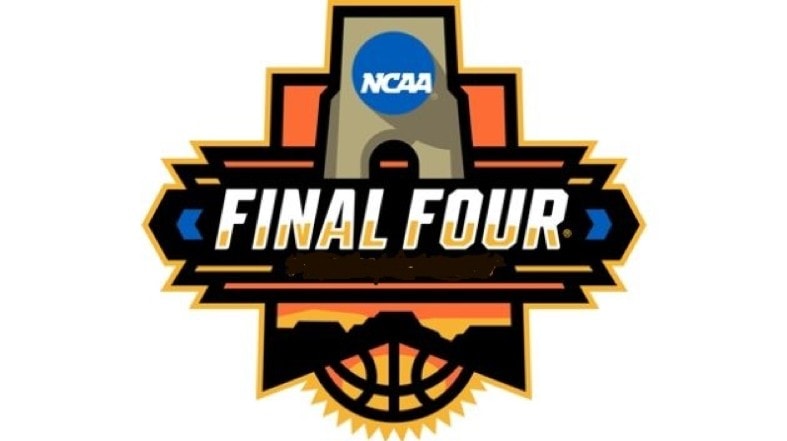 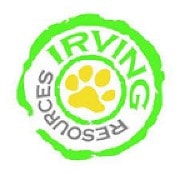 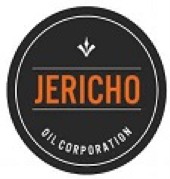 IRV – Closed this week at $1.79 ($1.80) so there was no negligible gain for the stock since 12-24-2018. The same holds true for JCO which had a small loss also during the tournament it closed today 41 cents vs 43 cents. Therefore, both companies will not advance to the Championship Game however I expect big things from both these stellar companies soon.
As stated from the beginning there are no losers in this tournament. Irving is drilling their first holes in their Japan high-grade Gold project. The company is cashed up and Quinton Hennigh runs the drill program. The share structure is tight and my moneys on “Q” to come thru.

Jericho (JCO) is my best Jr. Oil & Gas play by far. They own primo wells in the prolific STACK region in Central Oklahoma. The Oil price has been creeping up steadily and at $60 a barrel oil that is the sweet spot for JCO (Currently $63+). Management is rock solid and progressive.

Both companies have performed admirably hence they both deserve to be in the Championship Game. Anaconda (ANX) was 22 cents on 12-24-2018 and closed today at 33 cents a 50 % Gain. (ASZ ) Arizona) Silver Exploration was 8 cents and closed today at 15 cents an 88 % Gain.

Both companies have been on a roll since 2019 and have momentum in their corner. Since announcing the Big Man in the center Kevin Bullock as New CEO and another recent announcement of fantastic drill results, ANX will be a formidable opponent in the Finals. Head Coach, COB Jonathan Fitzgerald seems to always have an ACE up his sleeve at all times.
AZS is drill ready at their newest acquisition the Philadelphia Project and should commence any day now. With the two power forwards working well in tandem Mike Stark and Greg Hahn this should be an epic battle to who prevails in this tournament. Good Luck to both worthy teams.

WINNER WILL BE CROWNED NEXT FRIDAY APRIL 12 AT MARKET CLOSE 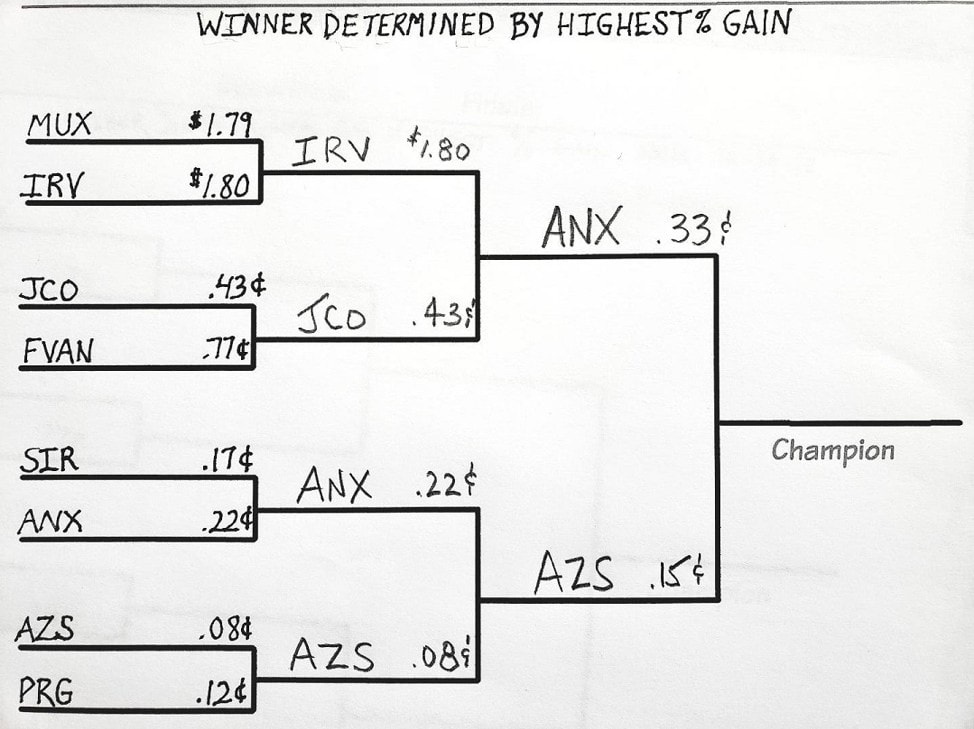 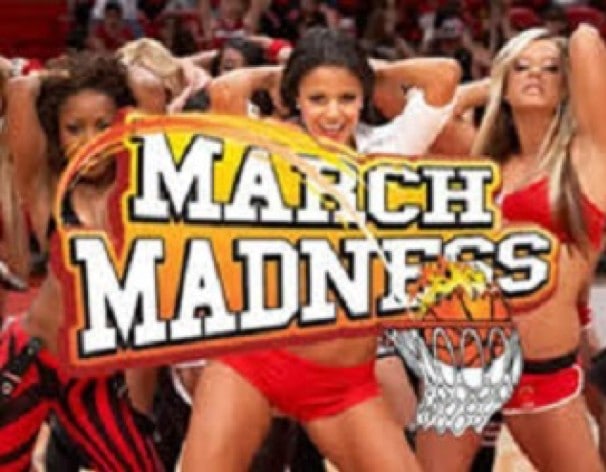 This article is for informational purposes only. It is certainly not investment advice. It is also not encouraging any gambling or betting in any way. Please consult Gamblers Anonymous if you feel the need to gamble on my tournament 🙂 Kevin Dougan (aka The Mick) runs a website Blue Sky Marketing which finds and promotes undervalued and out of favor companies with much upside and explosive potential growth. Many of these companies are clients and sponsors and I own shares in all of the companies mentioned in this article. Please sign up for my free newsletter on my website for new picks and updates!!! 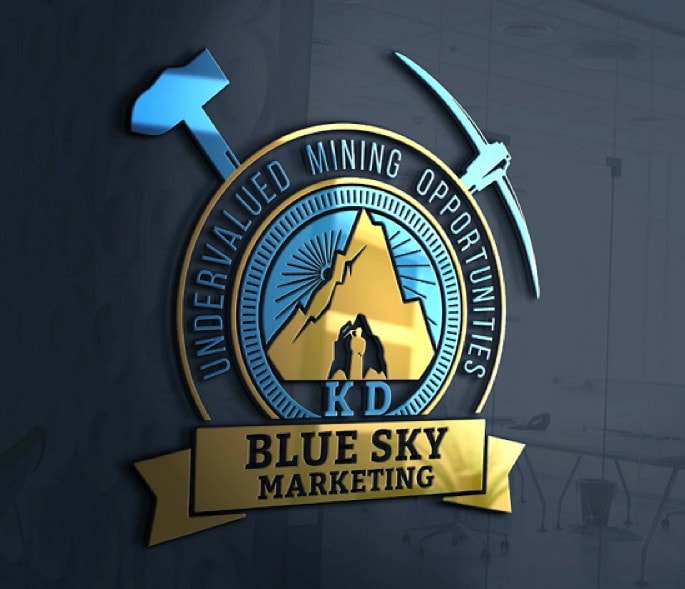