How will Russia’s invasion of Ukraine affect global food access?

The Russian invasion of Ukraine is endangering, even more, the supply of food. Russia and Ukraine play a critical role in food production. In 2019, for example, the two countries accounted for sixteen percent of global exports of cereals, including wheat, barley, sunflowers, and corn. Moreover, the U.S., Russia, and Ukraine dispute the top spots in global exports with Brazil, Argentina, and Canada. Although we don’t have 2021 data for Ukraine, as recent as 2019, the country referred to as “the breadbasket of Europe” was the fourth largest exporter of cereals worldwide. 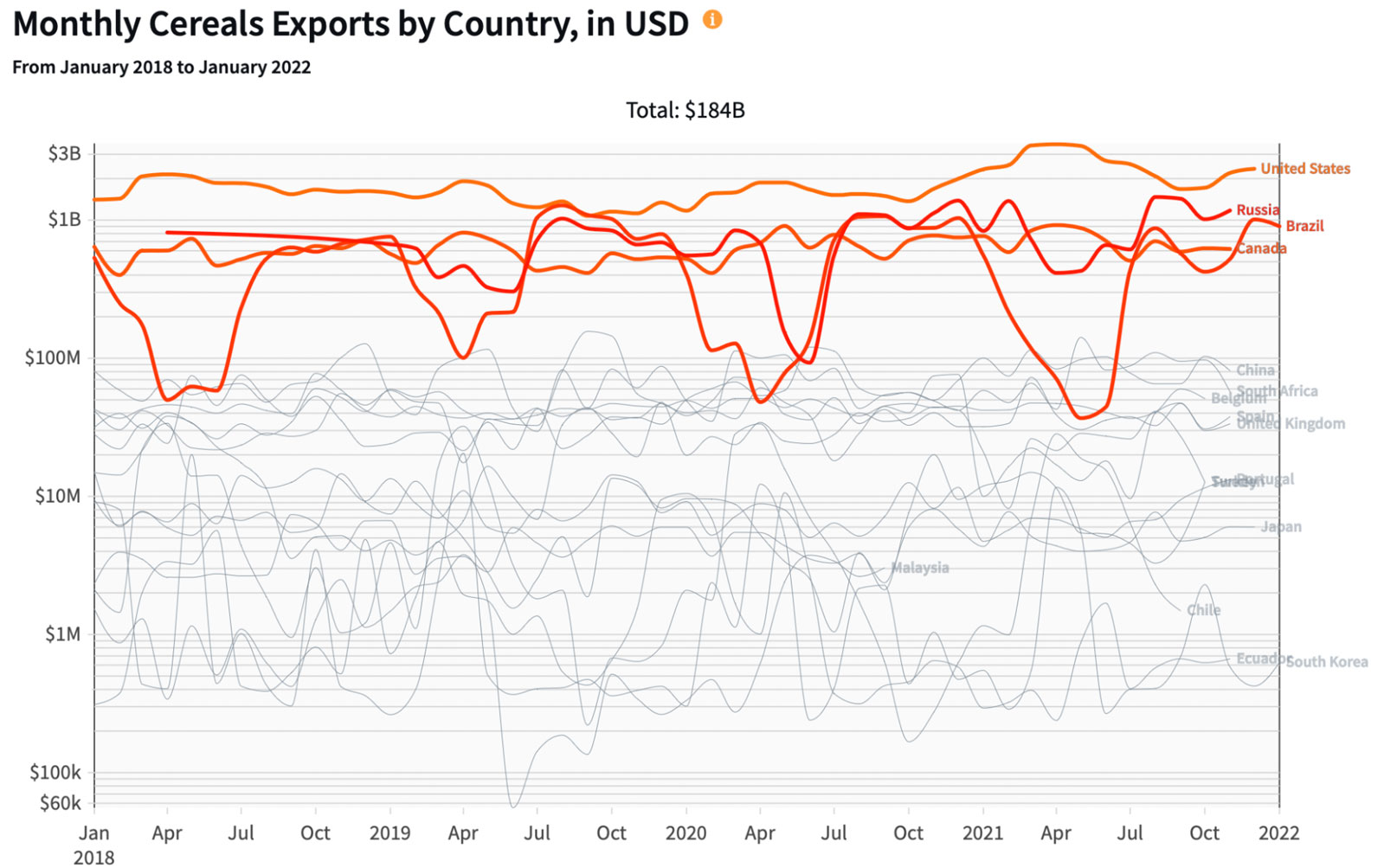 The drought and supply chain disruptions have impacted food trade and driven prices to historic highs. Cereals, for example, set record prices in 2021, increasing 48% in the last five years. Higher prices are the result of a historic drought affecting crops in the U.S., and value chain bottlenecks. With the Russian invasion of Ukraine, we will experience even higher prices and reduced access to food. With the war, there will be less production of crops, reduced trade, and higher costs of fuel, fertilizers, and other agricultural inputs linked to oil and gas prices.

With the invasion, cereal exports from Ukraine will virtually stop, and financial sanctions will likely affect exports from Russia, threatening food security worldwide. In addition, the war will impact food access in several countries: Egypt, Turkey, Iran, Bangladesh, Nigeria, Morocco, Yemen, Tunisia, Azerbaijan, and Sudan, among others. In 2019, these ten countries imported $20.9B in cereals, almost 44% from Russia and Ukrain.

But two countries are facing a bigger problem with constrained supply.Egypt and Turkey account for 17% of global wheat imports, and they are also the biggest importers of wheat from Ukraine and Russia.

Wheat is essential for Egyptians’ diet. People in Egypt consume bread at twice the global average. 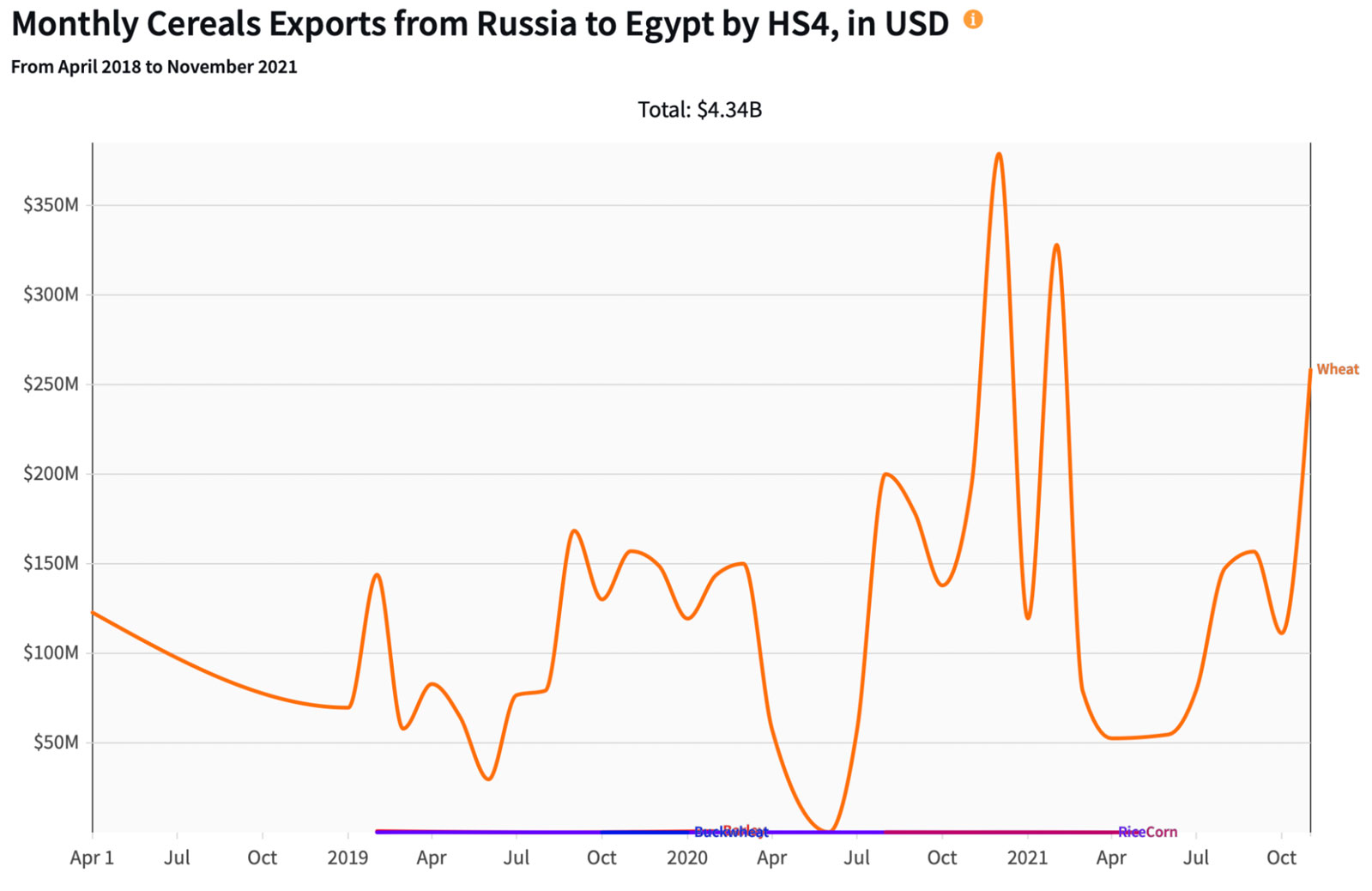 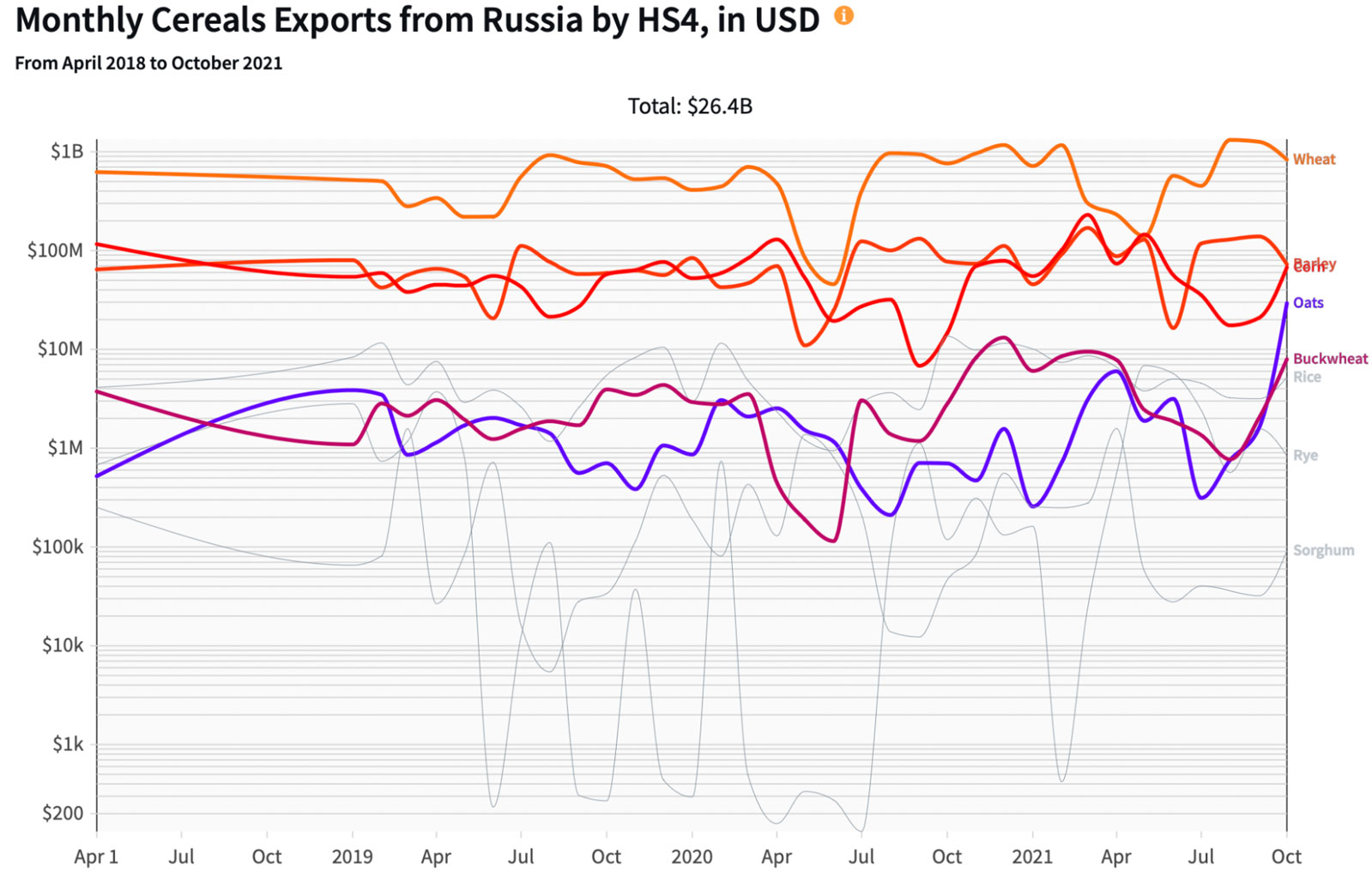 The war comes as wheat imports by Turkey and Iran will double in 2022 as a regional drought limits domestic production in these countries. In 2021, for example, Turkey imported 6.7 million tons of wheat ($1.58B) from Russia, an increase of $10.9M (5.26%) in one year. And Ukraine ranks second. 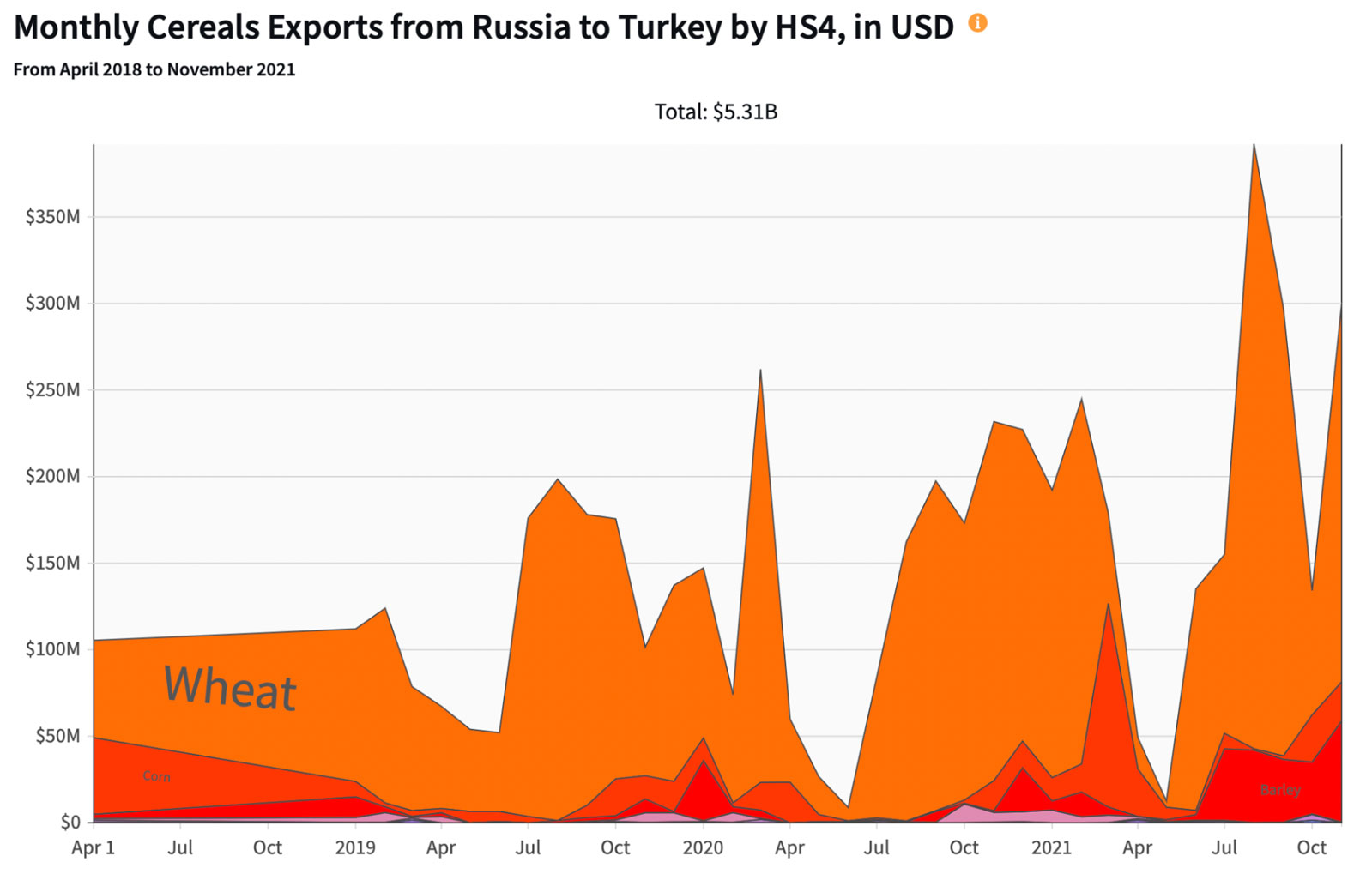 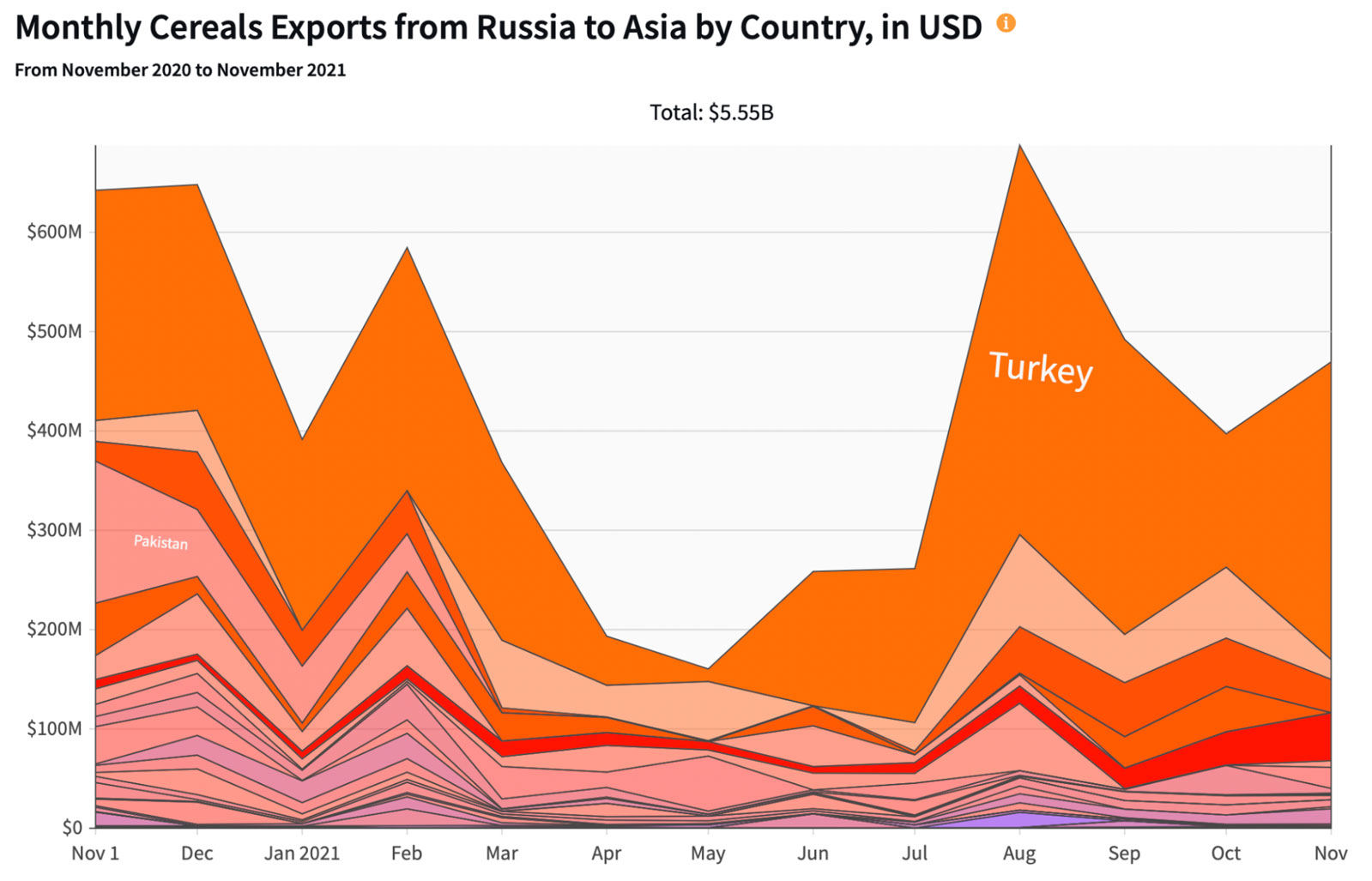 Egypt, Turkey, and many other countries in Africa and Asia will see their wheat supply cut dramatically. There’s a need to find alternative suppliers. There is a country that exports as much wheat as Russia: the U.S. 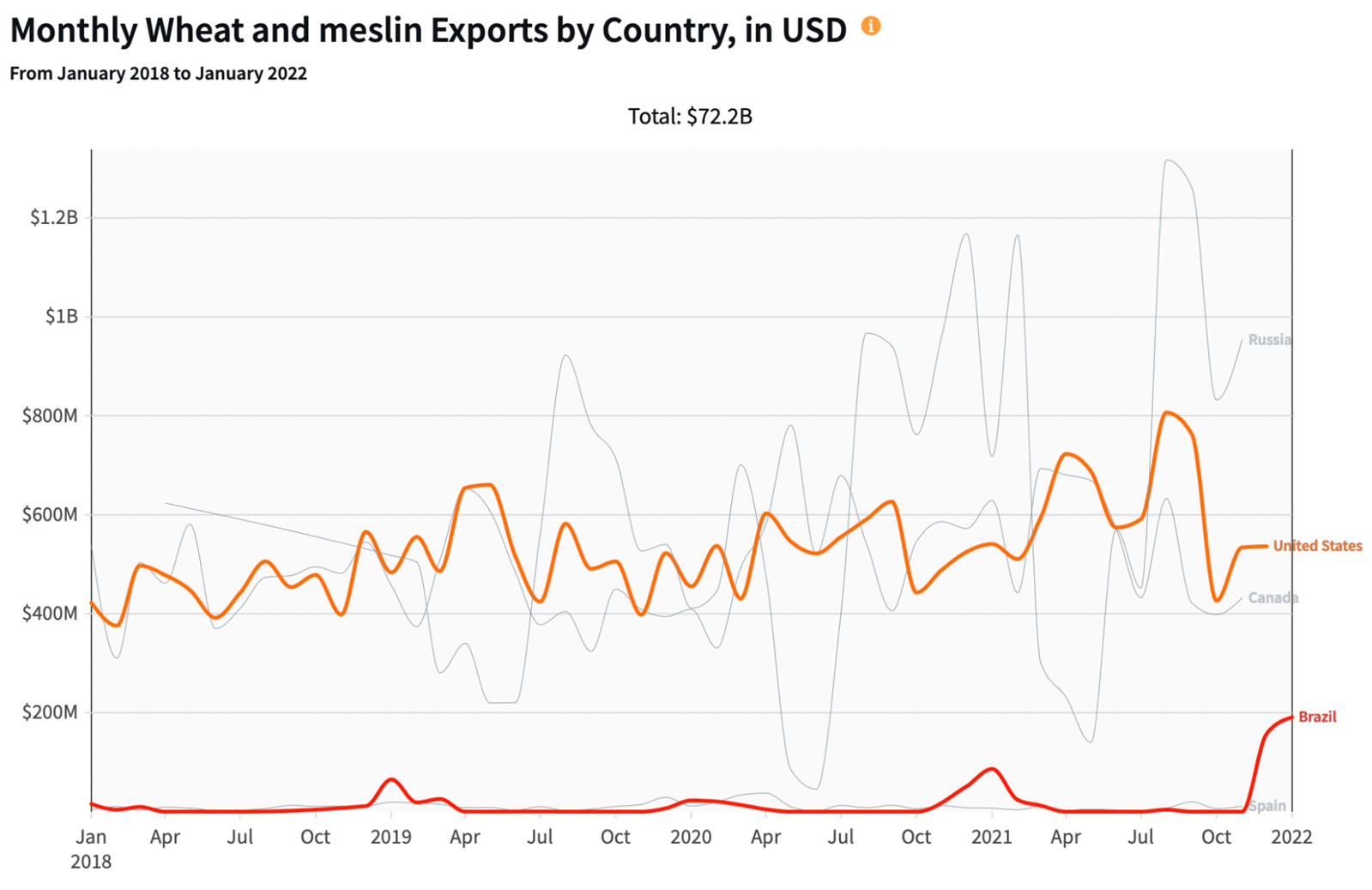 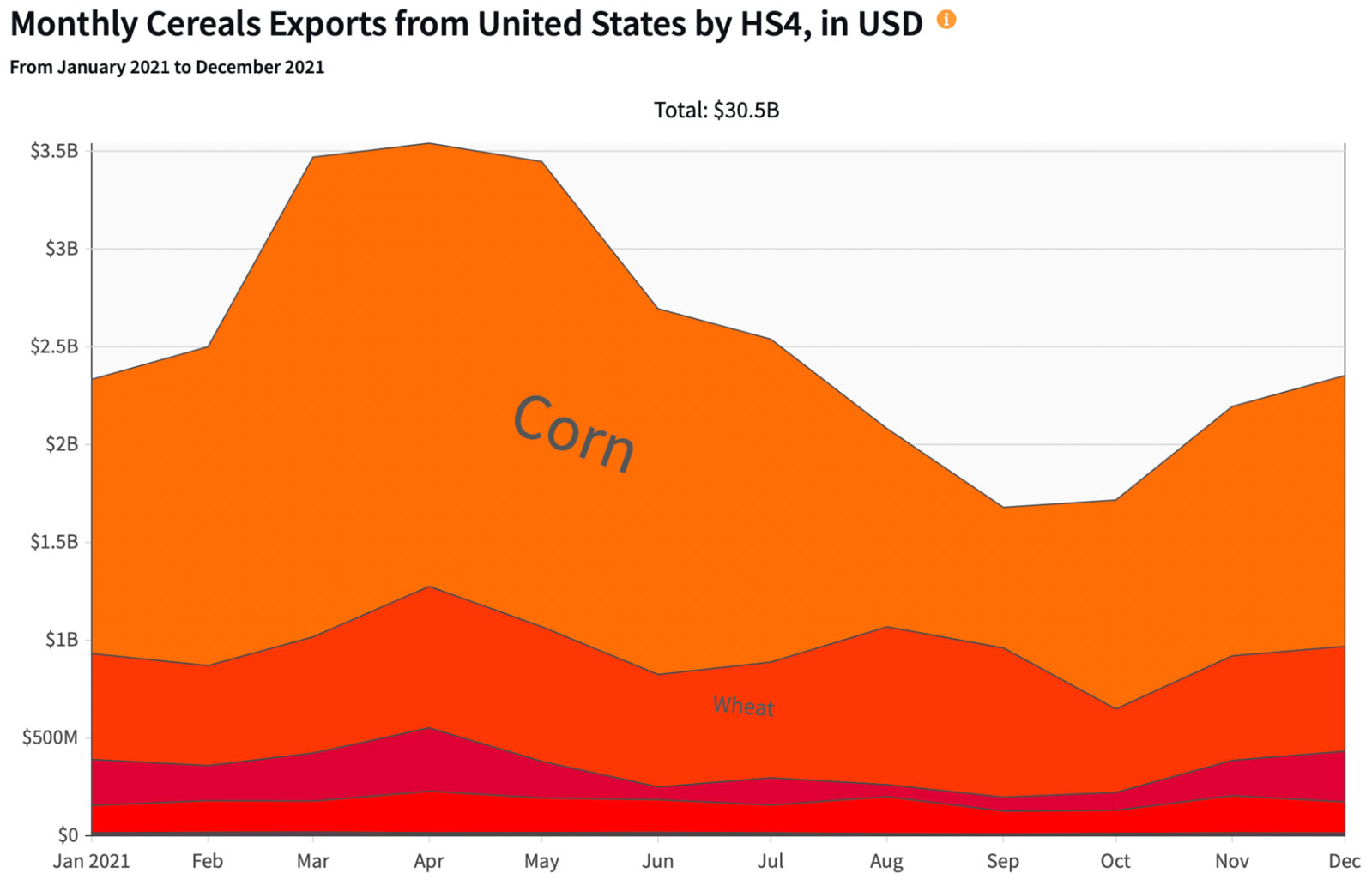 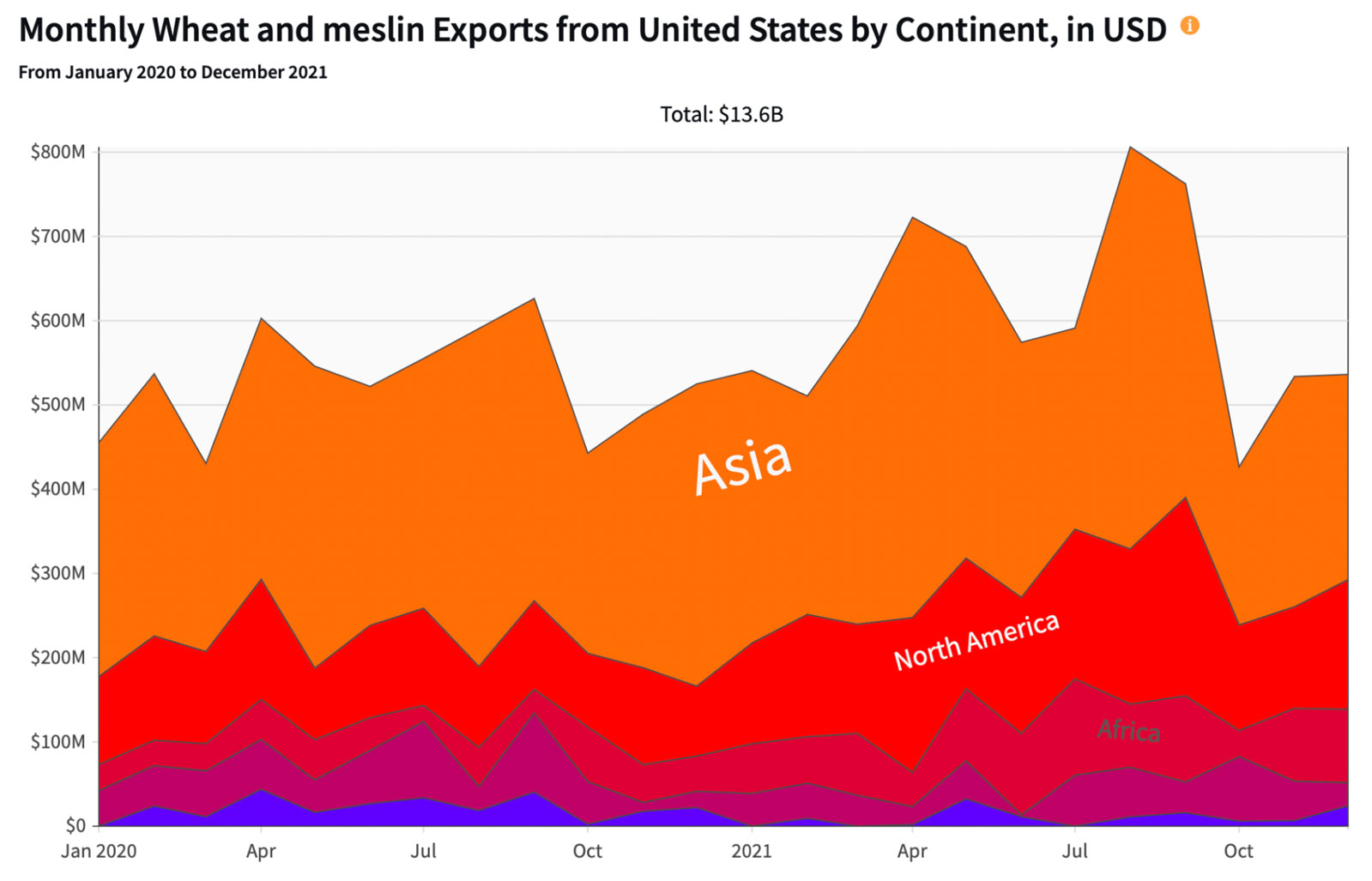 Most wheat exports from the U.S. go to Asia and North America. In 2021, the U.S. exported only $68M to Africa and none to Turkey.

There is only one big problem with American wheat exports; they are declining. In 2021, the U.S. exported 1.48B of metric tons of the crop, 23% less than the previous year.

A historic drought in the U.S. is grasping an area responsible for a fifth of fruits, cereals, and vegetable exports globally. From the Gulf of Mexico to the North Pacific to Main Street, farmers, ranchers, and consumers face the painful effects of the Great American Drought. As heatwaves get more extreme and frequent, we are experiencing a point upward from the High Plains to West to South.

Oregon, Texas, and Louisiana concentrated more than 90% of wheat exports in 2021. However, the drought has affected 41% of yields in the U.S., reducing exports by 29% metric tons and increasing the prices of flour and other wheat products. 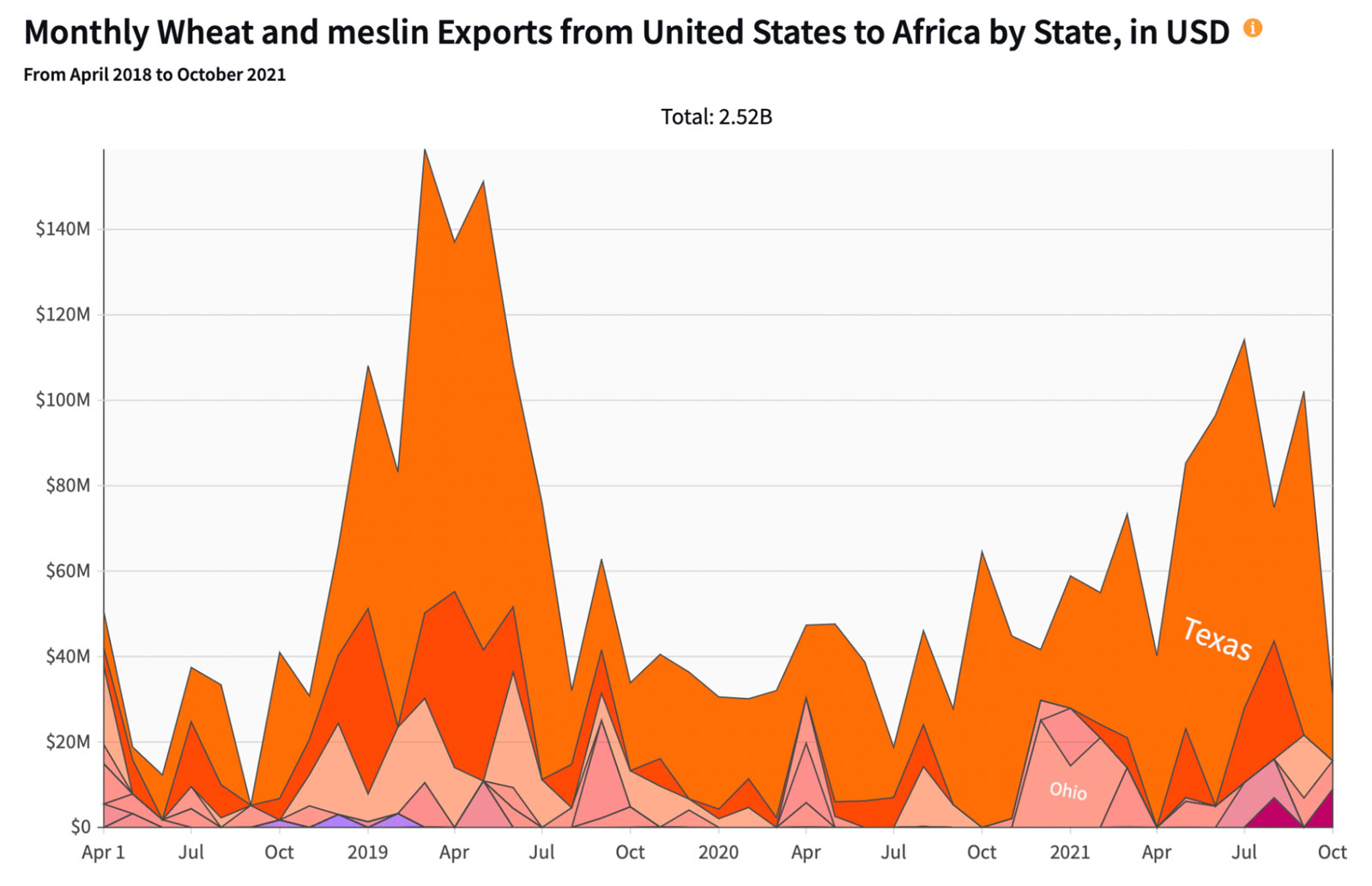 The drought is also affecting other wheat exporters. France, responsable for around ten percent of global exports of wheat, has decreased its exports too due to bad weather. In 2020, for example, wheat harvest was 25% less than 2019 because of unfavorable weather conditions. A once in 100 year drought is also affecting Argentina, a country with five percent of wheat exports.

Russia’s invasion of Ukraine poses severe risks to global food security. The war introduces considerable uncertainty into an already tight food supply chain. Although Egypt and Turkey will experience significant disruptions to their wheat imports, the effects are far reaching. Countries in Africa and Asia are highly dependent on Ukraine and Russia for cereals, particularly wheat.

With droughts and skyrocketing food and gas prices, there is the risk that some may seek to restrict exports. But, as we have seen before, trade restrictions on food have harmful effects, particularly on the most vulnerable countries.