To get more great content from Agora Financial click here.
Riverside Resources (OTCBB: RVSDF)
Maintain Buy up to: $0.24
Position sizing: 1.5%
Riverside is a prospect generator that works mainly in northern Mexico, Sonora state. I’ve visited several of the company’s sites. In fact, I was down there this past weekend.
Shares traded down in the past month. Shares are slightly down over the past six months and year.
Riverside recently raised over $2 million via “oversubscribed” private placement. It’s a vote of confidence in the company and its CEO John-Mark Staude.
I visited a couple more Riverside mineral claims the other day down in Sonora. Let’s begin with this shot from the pickup truck… Indeed, you know you might be onto something when the roads are paved with copper ore! 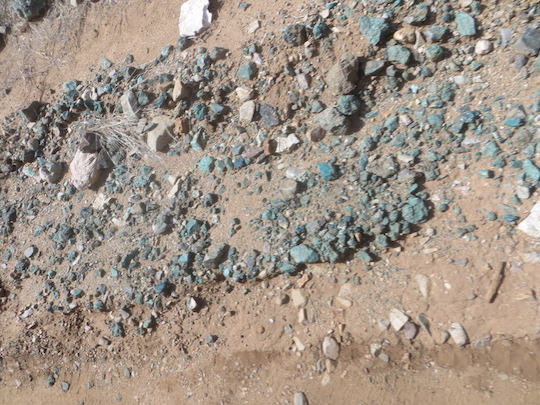 Copper mineralization in road gravel. BWK photo.
The green stuff is malachite, mostly; it’s copper mineralization that coats gravel in an ancient outwash/conglomerate system. The source (the technical term is “up-gradient origin”) is a nearby, massive copper porphyry… a true mountain of copper ore.
There’s been a bit of historic mining in the area but not much. Indeed, most of the ore body has barely been picked over topside by miners of old, and almost none of it has felt the gentle touch of a drill bit. But Riverside has consolidated the hodgepodge of claims into a much better package for purposes of bringing in a partner. It’s ready to go now. (Note: I said “now.”)
During one stop along the field-trip route, John-Mark and I were literally walking on high-grade copper ore (the green stuff). Like this… 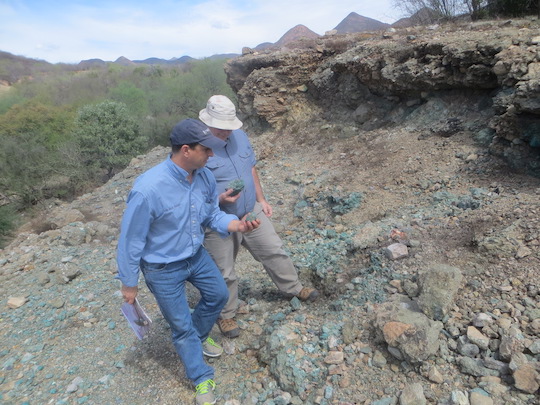 Your editor and Riverside CEO John-Mark Staude, walking on copper. BWK photo.
We were in the midst of a mineralized trend that’s literally miles-by-miles in dimension. It’s eastern Sonora, just west of the foothills of the mighty Sierra Madre mountain range. It’s volcanic caldera country — think of Yellowstone Park.
There’s placer gold mining in every streambed, water supply permitting. And there’s hard-rock mining to the east and west. The secret to success here is that much of the Riverside claim is buried, in some places under a thin layer of volcanic ash, like what you see here in this shot. 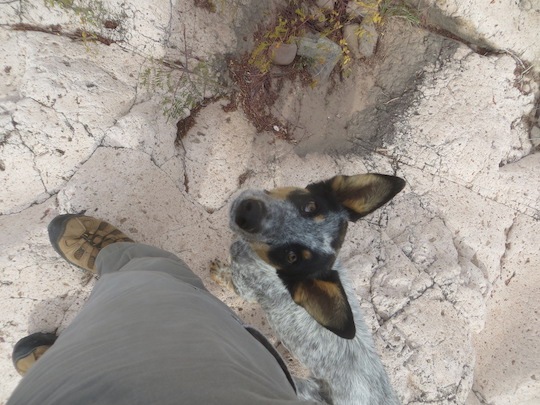 Your editor walks on volcanic ash, accompanied by a curious ranch dog. BWK photo.
Copper and gold. You want it? Right here… Riverside is absolutely ripe for a major combination with a larger company. The land position is second to none. The mineralization is vast, high grade, big size and eminently scalable. Company staff have done a splendid job of obtaining land position, permits, agreements with locals, nearby political support and more.
As a prospect generator, Riverside is in the business of developing multiple parallel stories, which add value. Stand by… That added value is likely to show up very soon! If you don’t own shares, get some. Maintain buy on Riverside up to $0.24.