James Pettit, CEO of Aben Resources, in conversation with Maurice Jackson of Proven and Probable, discusses his company’s summer exploration in the Golden Triangle and how the company plans to keep the momentum going throughout the year.

James Pettit, CEO of Aben Resources, in conversation with Maurice Jackson of Proven and Probable, discusses his company’s summer exploration in the Golden Triangle and how the company plans to keep the momentum going throughout the year.

Maurice Jackson: Joining us today is James Pettit, the president, CEO and director of Aben Resources Ltd. (ABN:TSX.V; ABNAF:OTCQB).
In our last interview, we discussed the next unanswered question for Aben Resources and that would be drill results. This week Aben Resources issued a press release conveying some intriguing results. Before we begin, for someone new to the story, who is Aben Resources and share with us the names and location of your three projects beginning with your flagship.

James Pettit: Aben Resources is a gold exploration company based out of Vancouver listed on the TSX Venture Exchange. Our flagship property is the Forrest Kerr property. It’s in the Golden Triangle, which is a region of northwestern British Columbia, which has got a tremendous history for high-grade discoveries, the likes of the Snip mine and the Eskay Creek mine discovered 30 some odd years ago. Eskay at the time was one of the highest grade mines in the world. Since then, there’s been a lot of discovery that’s happened over the years in terms of more gold, silver and copper. These are still in the development stage.

Many of them are waiting for possible higher prices for the commodity, but they’re probably the largest untapped development projects in the world, especially the copper projects. Now specifically with us, with the Forrest Kerr Project, we acquired that ground three years ago, and started assembling it. I put three claim groups together. We chose those because they’re on a major structural feature, which we look at as one of the controlling structural features in that whole Golden Triangle area. It’s called the Kerr Fault and it’s a big, big fault that you can see from space. 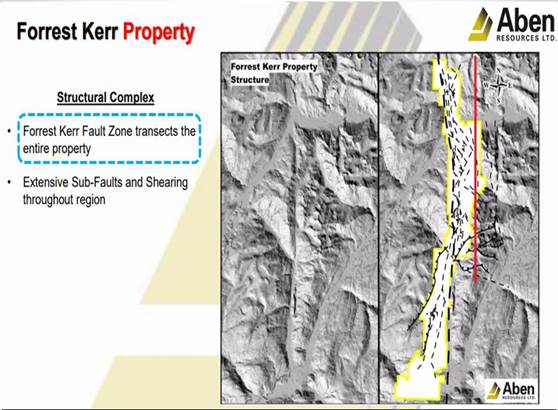 That is an area you want to be near for discovery potential and then there’s other geologic features that you want to be coincidental to that, and we’re right in between them. We’re in a good area. We’re getting a lot of attention. The market’s certainly paying attention to everything that goes on up there. The most recent new production up there is Pretium Resources’ Brucejack Mine, which is a very high-grade gold mine. That really brought about $2 billion in value to its investors. There’s lots of potential there. We’re excited about it.
That’s why we’ve been so concentrated on it. This year we’ve drilled now I think just short of 40 holes. We’ve got 24 to be released still. That’s going to take us through the rest of the year almost. We have another project that’ll get us through the winter because the weather in the Golden Triangle is pretty severe. It’s coastal mountain range right beside the panhandle of Alaska and gets a tremendous amount of rain or snow. It becomes almost impossible to work up there for the winter, unless you’ve got just a huge amount of money and resources to do it. That whole area will be going quiet soon.
We have another project called the Chico Project, which is in Saskatchewan, just south of what used to be called the Claude Resources gold mine. It’s been bought by Silver Standard for $337 million. Silver Standard is now called SSR. It acquired the ground between the Chico property and its property, which it bought from Claude Resources. Basically we think we’ve got an extension of what SSR is looking for because SSR’s interest now is to expand the known resource. To keep that mine alive for the next 20 years, it needs to find more of a resource. 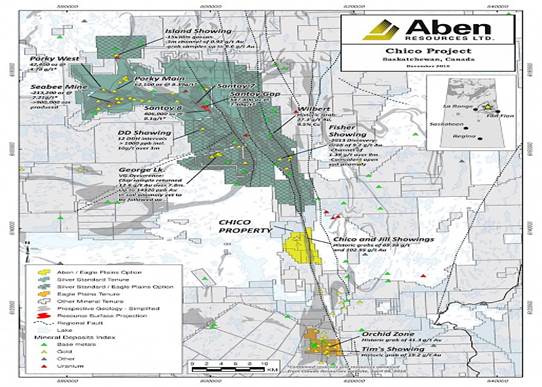 SSR has got a good resource to start with that itbought, but I think it has probably got five to seven years left. SSR wants to take this further. It’s drilling on the ground between them and us now. It has acquired all the ground. It’s giving us a good model to work with. We’ll go in there in the winter. It’s the best time to drill in Saskatchewan because it’s flat, it’s frozen. The lakes are frozen, so we can access an egress very easily. Essentially, we just put up the camp, bring in the rig, and move the rig with a helicopter if need be, or we skid it. We’ll be going in there in February. That’ll keep momentum going for the company.
Then we’ve also got a project up at the Yukon called the Justin, which is tied right on to Golden Predator’s ground, what it calls 3 Aces. We’re right on strike to the 3 Aces structure. We’ve done a little bit of work there this year in terms of trenching with the mechanical backhoe. We’ve got that up to the site by helicopter, and we’re waiting on assays. We’ve spent 10 days doing this. We think we’re sitting right on top of something very similar to 3 Aces, which is a very high-grade epithermal or hydrothermal quartz vein system. It’s very rich. 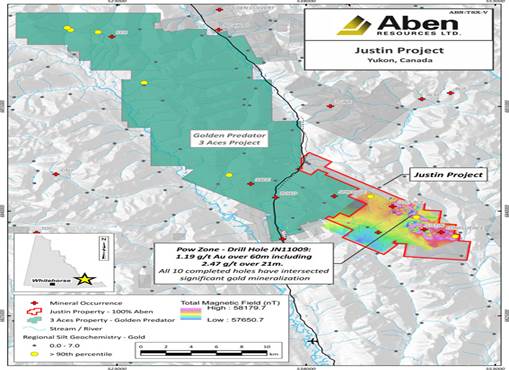 We’ll know when we get the assays. If they come back the way I think, we’ll be setting up a program for next year. That’s a good project to have in the shoulders between the Forrest Kerr or before the Chico mine’s down in the winter. We can’t really get into the Forrest Kerr until June-July, so we can get up into this region in the interim and keep moving them forward. We’ve got three really good projects to work on, but our flagship is definitely Forrest Kerr because the audience is there. It’s an area play. We all love area plays. That’s where we stand right now.
Maurice Jackson: Well, speaking of the Forrest Kerr, let’s focus our discussion today on the Forrest Kerr. We have some exciting news; what can you share with us?
James Pettit: We have a new zone. We’ve been working and concentrating on the North Boundary Zone, but this season we drilled three holes to the south of the North Boundary Zone. It was a kilometer and a half south. We put in these three holes because we’re trying to buy time, so we could get more assays back because our concentration is the North Boundary Zone and we needed guidance from some of the assays. We did do that, but we decided to drill where we did because there is a geochem anomaly and target that we wanted to test and it was coincidental with an old geophysical survey that showed something promising.

Geophysical anomalies are interesting, but certainly not like a geochem where you actually get the gold in the sample and that’s why you’re there. You have a good geophysical and geochem target to work with, and it turned out that we did the right thing. We’ve hit something there. It’s not as high-grade as the North Boundary appears to be, but it’s broad and it’s mineralized. I’ll use the best of the three holes, hole 21. You’ve got almost 380 meters in that hole is well mineralized, primarily gold, from trace level of 0.1 all the way up to 5 grams every interval.

The way we set it up, it’s almost like a graph. You very rarely see that much continuous mineralization like that. Well, it’s a lot of important information about the tenure of mineralization in that region. That’s definitely has our attention. We need to drill more holes there. We’ll get to it next year. The season’s definitely winding down up there right now, but it’s going to give us a lot of info.
Plus, we have now flown the entire valley using an EM geophysical survey, which encompasses both boundary zones to the north and south. We’re actually just waiting for the results and the interpretation of the survey. We’ll take that information at increased amount of geochem sampling that we’ve done, as well as all the assay results that we’ll have for the season. We’ll use that and compile some significant information for next year and work up our next series of targets.
Maurice Jackson: This is quite intriguing, exciting, any adjective you like to associate with it. Congratulations, sir. Now prior to this week’s press release, Aben Resources was able to successfully complete a financing and secured a major shareholder. Share the details with us, sir.
James Pettit: The first hole we put out this year was spectacular. It had an interval of 10 meters of roughly 38 grams. I mean that’s spectacular in itself, but within that was six meters of 62 grams gold. That’s like two ounces. Spectacular results. That got the market’s attention. The stock really moved up. The interest for financing was immediately apparent. We did announce a $4.2 million financing and half of it was taken by a fellow named Eric Sprott, who is a bit of a gold legend.
He started Sprott Securities, which now has a big presence in Toronto and also a big presence in Carlsbad, California. He is the consummate and ultimate gold bug. He loves gold and is not afraid to take a big stand in an early-stage deal like this. This is the exploration phase. This is potentially where you can absolutely make the most. You’re in at a price that seems very cheap and the market cap is low and you have this discovery. From that point on, you want to keep it growing and the market reacts correspondingly. He’s well aware of that. He’s not afraid to take a shot. He does it with a number of companies.
But when he gives his blessing to it, it’s pretty substantial. Then we also raised another million dollars after that largely because his name was now attached to the original financing, so we raised another just short of a million dollars flow through. The company now has just over $7 million. We’ve basically got next year’s program paid for.
Maurice Jackson: That leads to my next question, what is the burn rate and does Aben Resources plan to return to the market in the foreseeable future for another financing?
James Pettit: Well, the second question’s answer is no, we won’t. We don’t need to. Our burn rate varies from where we are in the area if we’ve got things on the go, the drill program, etc., our burn rate, and I’m just talking about basically our G&A and marketing burn rate, that can grow to $200,000 a month. Then the field work is always budgeted. This year we had budgeted about $1.5 million and we increased it by about $1 million. This year all in all we spent about $2 to 2.2 to 3 million. I haven’t got the finals number in. That’s all in for that project. We doubled the size of the drilling program.
We’re getting really close to shutting down, but I don’t see it going over that. For the G&A side, the operations of the office in Vancouver in marketing because we do. It’s important to spend money on marketing. We travel a lot marketing this project. That runs about $200,000 and varies up to $250,000 a month. Then when we aren’t working, everything obviously slows down, but then we are still marketing because we want people to know what we achieved. We always have goals. We want the market to understand we’re achieving the goals. I think that’s quite important.
Maurice Jackson: Indeed it is. Switching gears onto management. Aben’s management team has a proven pedigree of geological and business acumen. I want to focus on potential amalgamations in the sector should this occur. Share some of the past successes of management rewarding their shareholders on previous arbitrage successes.