Miles Franklin sponsored this article by Gary Christenson. The opinions are his.
Christopher Whalen wrote “Trump is Right to Blow Up the Fed.” He stated:
“Anybody who cares to read the 1978 Humphrey Hawkins law will know that the Fed is directed by Congress to seek full employment and then zero inflation. Not 2 percent, but zero. Yet going back a decade or more, the Fed, led by luminaries such as Janet Yellen and Ben Bernanke, has advanced a policy of actively embracing inflation.”
From the Federal Reserve’s web site:
“The Congress established the statutory objectives for monetary policy—maximum employment, stable prices, and moderate long-term interest rates—in the Federal Reserve Act.”

So What?
1) Prices were stable for the one hundred years before the Federal Reserve’s “takeover” of the money supply in the U.S. The rising prices problem occurs because of Fed policies, not time.
2) The above are examples of price inflation. You can add 999 more from your personal experience. The official numbers from the government are… well… untrustworthy.
3) Prices rise more rapidly than the Humphrey Hawkins law (zero percent) specifies.
4) Prices rise more rapidly than the 2% inflation target that the Fed endorses. [Why 2% instead of 3.96% or 0.22%?]
5) Congress could vote to audit the Fed. It does not.
6) Congress could demand the Fed follow law. It does not.
7) Congress could dissolve the Fed and return to a modified gold standard. This would encourage government accountability, stable prices, and decrease Wall Street’s influence over our lives and economy. For obvious reasons, it does not.
The Fed (and other central banks) engaged in massive Quantitative Easing—bond monetization or “printing currencies” for the past decade. Other central banks created currencies and bought bonds, stocks, ETFs, gold and politicians with their created “from thin air” currency units. QE works well for the financial and political elite, but not for “Main street” USA, the French “Yellow Vests” or most of the bottom 90%.
THE OFFICIAL NARRATIVE IS:
The Fed is necessary to manage the economy.
[The banking cartel owns the Fed to ensure the cartel’s profitability, influence and control over politicians.]
The Fed must remain independent.
[“Independent” is code for not controlled by Congress or the law. The Fed ensures transfer of wealth to the political and financial elite.]
The Fed should not be audited.
[What secrets would an audit discover?]
The Fed will create economic stimulus as needed.
[Yes, but what is the cost to the economy, pension plans, savers, and investors?]
Federal Reserve Notes (dollar bills) are “good” because they are debts issued by the Fed and backed by the full faith and credit of the United States.
[Debts of a corrupt central bank backed by the credit of an insolvent government are valuable only if we maintain confidence in both. But many of the stories about the Fed, dollars, unpayable debt and inflation statistics are lies… which will destroy confidence in both.]
TRUTH AND LIES?
In 1967 the Jefferson Airplane sang:
“When the truth is found to be lies,
All the joy within you dies.”
In 2019, regarding the dollar (and other debt-based fiat currencies), their lyrics could be:
“When the truth is found to be lies,
Confidence in currency dies.”
WHAT LIES?

“There will be no profit in holding them [silver coins] out of circulation for the value of their silver content.”

“… your dollar will be worth just as much tomorrow as it is today. The effect of this action, in other words, will be to stabilize the dollar.”

“When the truth is found to be lies,
Confidence in currency dies.”

When President Johnson lied about silver coins, $100 bought 77 ounces of silver. Today it buys about 7 ounces. In 2025 that $100 might purchase less than one ounce of silver.
When President Nixon lied about gold in 1971, $1,000 purchased 24 ounces of gold. Today $1,000 purchases about 0.75 ounce of gold. In 2025 that $1,000 might purchase less than one-tenth ounce of gold.
The Fed’s 2% inflation policy is nonsense. Their narrative pretends the Fed has a plan, stimulus is necessary, Federal Reserve Notes are a better currency than gold, and 999 other lies. They tell lies because the economic situation is SERIOUS.
As Jean-Claude Juncker (prominent EU Politician) noted,

“When it becomes serious you have to lie.”

How Do We Protect Our Assets and Retirement Income from Currency Collapse and Economic Lies?

Miles Franklin sells silver and gold. Call 1-800-822-8080 and buy metals for insurance against the lies and devaluation necessary to support an unbacked fiat currency.

… or you can trust the political and financial elite to take care of your needs while they enrich themselves.

They might care about you, you might win the Powerball lottery, and extra-terrestrials might pay off our national debt with proceeds from asteroid mining…
Trusting the Fed less, and expecting a silver rally…
Gary Christenson
The Deviant Investor

4/10 Watching Gold And Silver Is Like Watching The Grass Grow
4/8 Silver Now-Eight Years Later
4/5 Is This Patriotism? Is This How We Make America Great Again?
4/2 ZIRP and NIRP
4/1 How Many Times Have You Heard “You Can’t Eat Gold” As A Reason NOT To Own Gold? 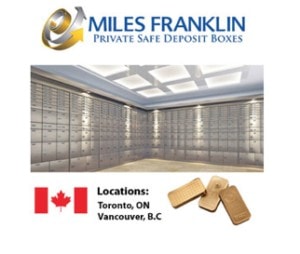 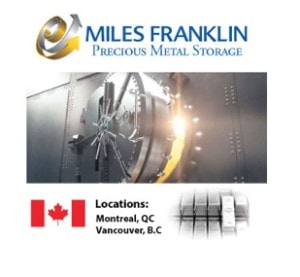 Miles Franklin was founded in January, 1990 by David MILES Schectman. David’s son, Andy Schectman, our CEO, joined Miles Franklin in 1991. Miles Franklin’s primary focus from 1990 through 1998 was the Swiss Annuity and we were one of the two top firms in the industry. In November, 2000, we decided to de-emphasize our focus on off-shore investing and moved primarily into gold and silver, which we felt were about to enter into a long-term bull market cycle. Our timing and our new direction proved to be the right thing to do.

We are rated A+ by the BBB with zero complaints on our record. We are recommended by many prominent newsletter writers including Doug Casey, Jim Sinclair, David Morgan, Future Money Trends and the SGT Report.

For your protection, we are licensed, regulated, bonded and background checked per Minnesota State law.