Results highlight increased indicated resources, the robust economics and long-term potential for the Triple R deposit
FISSION URANIUM CORP. (“Fission” or “the Company“) is pleased to announce the results of a Prefeasibility Study (the “PFS”), conducted by Roscoe Postle Associates Inc. (“RPA”) and first-time estimate of Mineral Reserves for its’ Patterson Lake South (“PLS”) property in Canada’s Athabasca Basin region. With an estimated OPEX of just US$6.77/lb U3O8 and an IRR (pre-tax) of 29%, the PFS further enhances the potential for highly-economic production at PLS. In addition, with the R780E zone still open at depth and along plunge to the east and the recently discovered high-grade mineralized zones along strike to the west and east (R1515W, R840W and R1620E zones) yet to be included in the reserve mine plan, there is clear upside for expanding the resource base and mine life and further improving the economics. The PFS is based on an open pit / underground hybrid operation and the Company is also progressing a PEA-level underground-only alternate scenario that indicates potential for improved economics.

Ross McElroy, President, COO, and Chief Geologist for Fission, commented, “This prefeasibility study presents a very strong base case for production at PLS and further improves the potential economics and de-risks the project. Particular highlights include very low operating costs, a high internal rate of return and broad scope for growth and optimization. It also includes the important milestone of estimating mineral reserves at PLS. The focus of the report is production from the R00E and R780E zones. Moving forward, we have the potential to add resources to these two zones, and from the three other known mineralized zones, which may increase mine life and improve economics. Overall, we are very pleased with the results of the report and we are continuing to advance PLS towards feasibility status.”
The PFS has an effective date of April 9, 2019 and supersedes all previously-filed technical reports for PLS.

The PFS was prepared by independent consultants led by RPA, who carried out resource and reserve estimation and mining work, assisted by BGC Engineering Inc. (geotechnical aspects), BAUER Foundations Canada Inc. (dyke and slurry cut-off wall), Wood Canada Ltd. (process and infrastructure), Clifton Associates Ltd. (environmental and tailings) and Arcadis Canada Inc. (radiological considerations).
In addition to managing radiological issues common to high-grade uranium mining, a key technical challenge to developing the operation will be water control related to Patterson Lake and saturated sandy overburden. The PFS proposes a system of dykes and slurry cut-off walls – proven techniques successfully implemented at a number of Canadian mining operations, including the Diavik diamond mine and the Meadowbank gold mine. The development scenario does not require any new, untested, conceptual mining or construction methods. Since the PEA, extensive field programs have been carried out to confirm overburden characteristics, with these test results forming the basis of the PFS estimates.

Mineral Resources were updated for the PFS by RPA using data collected up to and including 2018 diamond drilling campaigns. Estimated block model grades are based on chemical assays only.
The Triple R deposit as defined in the Mineral Resource estimate is comprised of several nearly vertical stacked lenses across five mineralized zones that are generally oriented with an azimuth 66.2°. A set of cross-sections and level plans were interpreted to construct a total of 82 three-dimensional wireframe models (domains) for the mineralized zones at a minimum grade of 0.05% U3O8. Of the 82 wireframes, 16 are High Grade domains created at a minimum grade of approximately 5% U3O8, which are enveloped within the Low Grade domains.
Block model grades were interpolated by inverse distance cubed (ID3). Classification into the Indicated and Inferred categories was guided by the drill hole spacing and the continuity of the mineralized zones.
The updated resource estimate represents an 18% increase in pounds U3O8 classified as Indicated as compared to the previous Mineral Resource dated February 20, 2018. The increase in resource classified as Indicated is primarily due to infill drilling and conversion of Inferred Resources.

A first-time estimate of Mineral Reserves for the Project was carried out by RPA based on an open pit that captures all of the High Grade Indicated Resources in the R780E and R00E zones. Similar in concept to the 2015 PEA, the PFS Base Case design includes a sand dyke and plasticized cement slurry cut-off wall projecting into Patterson lake (Figure 1), and an onsite processing plant and associated infrastructure (Figure 2). Updates to the Mineral Resources and geotechnical understanding of the overburden and host rock are incorporated, based on field data collection programs and subsequent analysis.
Figure 1 – Dyke, Slurry Cut-Off Wall, and Open Pit Configuration 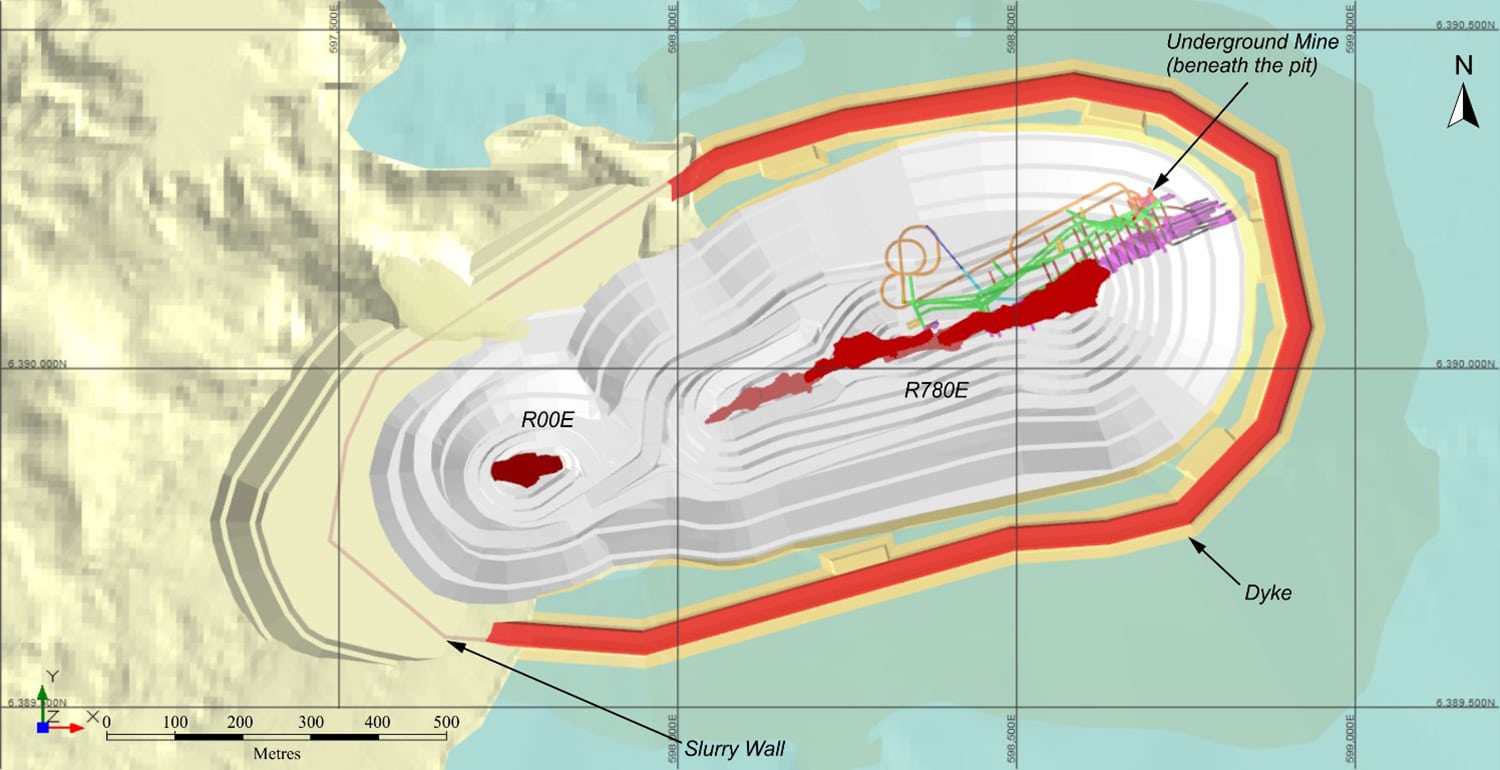 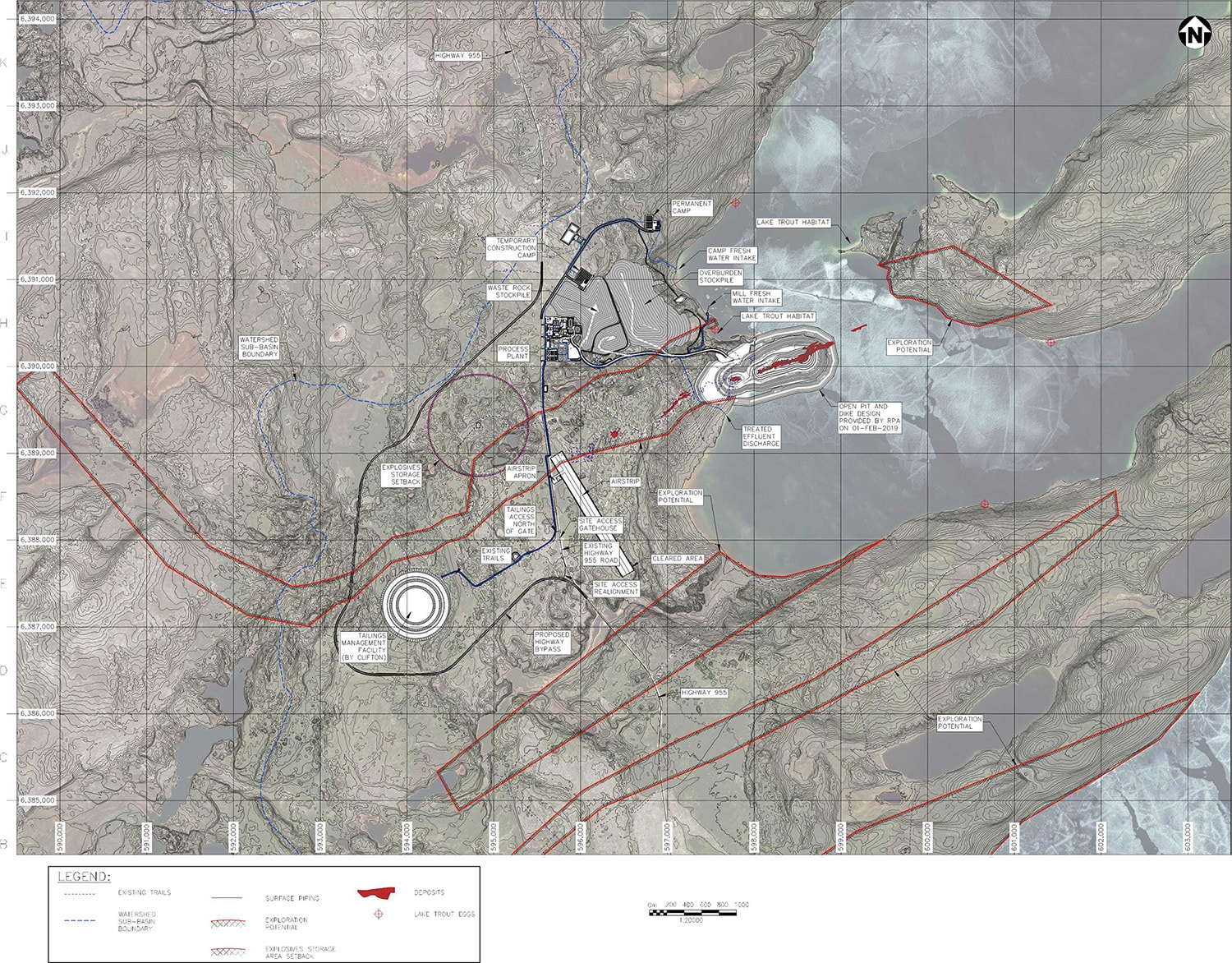 Resource to reserve conversion was high, with modest mining losses (part of the “modifying factors” that differentiate reserves from resources) consisting of:

PFS Base Case Life of Mine (LOM) Plan Summary

Underground Only PEA-Level Scenario
An alternative scenario involving sinking shafts on land and developing underground workings below Patterson Lake eliminates the need for the dyke and slurry cut-off wall construction prior to mining (Figure 3). Featuring a reduced footprint and environmental impact, this scenario results in some improved economic outcomes (such as reduced initial capital costs), despite the loss of some Indicated Mineral Resources to a crown pillar.

A comparison to the PFS Base Case is presented in Table 3.

This PEA-level scenario is preliminary in nature and is based on assumptions and estimates that are not at a PFS level of detail and therefore cannot be categorized as Mineral Reserves. Mineral Resources that are not Mineral Reserves do not have demonstrated economic viability. There is no certainty that the PEA results will be realized.
Fission plans to advance the Underground Only Scenario to PFS level, for direct comparison to the Base Case, and decision-making going into FS.

The Company also announces it has completed the Winter 2019 work program at PLS. The final work elements included:

The 31,039 hectare PLS project is 100% owned and operated by Fission Uranium Corp. PLS is accessible by road with primary access from all-weather Highway 955, which runs north to the former Cluff Lake mine and passes through the nearby UEX-Areva Shea Creek discoveries located 50km to the north, currently under active exploration and development.

This News Release describes an updated Mineral Resource estimate, a first-time Mineral Reserve estimate, and a PFS Life of Mine Plan and cash flow based upon geological, engineering, technical and cost inputs developed by RPA and other study participants. A National Instrument 43-101 Technical Report will be filed on SEDAR and made available on the Company’s website within 45 days. The technical information in this news release has been prepared in accordance with the Canadian regulatory requirements set out in National Instrument 43-101 and reviewed and approved by Jason Cox, P.Eng. of RPA, an independent qualified person.
On behalf of the company, the technical information in this news release has been prepared in accordance with the Canadian regulatory requirements set out in National Instrument 43-101 and reviewed on behalf of the company by Ross McElroy, P.Geol., President and COO for Fission Uranium Corp., a qualified person.
About Fission Uranium Corp.
Fission Uranium Corp. is a Canadian based resource company specializing in the strategic exploration and development of the Patterson Lake South uranium property – host to the class-leading Triple R uranium deposit – and is headquartered in Kelowna, British Columbia. Fission’s common shares are listed on the TSX Exchange under the symbol “FCU” and trade on the OTCQX marketplace in the U.S. under the symbol “FCUUF.”
ON BEHALF OF THE BOARD
Ross McElroy  – Investor Relations
______________________________
877-868-814
ir@fissionuranium.com
Ross McElroy, President and COO
www.fissionuranium.com
Cautionary Statement:
Certain information contained in this press release constitutes “forward-looking information”, within the meaning of Canadian legislation. Generally, these forward-looking statements can be identified by the use of forward-looking terminology such as “plans”, “expects” or “does not expect”, “is expected”, “budget”, “scheduled”, “estimates”, “forecasts”, “intends”, “anticipates” or “does not anticipate”, or “believes”, or variations of such words and phrases or state that certain actions, events or results “may”, “could”, “would”, “might” or “will be taken”, “occur”, “be achieved” or “has the potential to”. Forward looking statements contained in this press release may include statements regarding the future operating or financial performance of Fission and Fission Uranium which involve known and unknown risks and uncertainties which may not prove to be accurate. Actual results and outcomes may differ materially from what is expressed or forecasted in these forward-looking statements. Such statements are qualified in their entirety by the inherent risks and uncertainties surrounding future expectations. Among those factors which could cause actual results to differ materially are the following: market conditions and other risk factors listed from time to time in our reports filed with Canadian securities regulators on SEDAR at www.sedar.com. The forward-looking statements included in this press release are made as of the date of this press release and the Company and Fission Uranium disclaim any intention or obligation to update or revise any forward-looking statements, whether as a result of new information, future events or otherwise, except as expressly required by applicable securities legislation.